Saturday morning worship gets crowd to ‘Do Something’

June 6, 2016 / By Kathleen Rubino / .(JavaScript must be enabled to view this email address)

“We, the young adults of the Upper New York Conference, seek to bring to life the reality that Annual Conference is worship,” Warren said. “This is sacred ground; we are in the presence of God.” 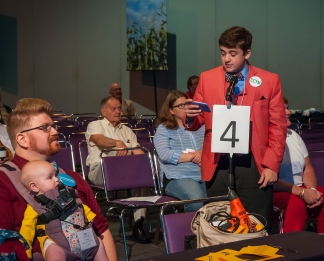 This worship service mirrored the business of Annual Conference, as young people who spoke the readings raised their cards as UNY members would do during plenary if they want to speak at the microphone. Following acknowledgement from Warren, each speaker read their reading, with the second reading spoken in Spanish.

Former Conference Council on Youth Ministry (CCYM) Co-Chairs Emily Allen and Maya Smith took the stage to give an update on all that has transpired with regards to Conference youth – from Fall Gatherings to Up!Word.

“Overall the events gave us a nudge,” Maya Smith began.

“This is only the beginning of the lives of young people in Upper New York,” Emily Allen.

As their speech went on, young people formed a line in the front of the room, holding up posters that stated what they have done in the past year.

“As a Church, God calls us to take action,” Allen said. “How will you affect the lives of the people around you?”

The two former co-chairs then announced the new CCYM co-chairs, Katie Allen and Elyse Muder, and urged the crowd to “keep doing something.”

Laurel O’Connor, Africa 360 field coordinator, and Riley O’Flynn took the stage for the spoken word. O’Connor began by describing a scene where she grows impatient by people at a meeting who just talk.

O’Flynn urged the audience to show their faith through action.

“Faith without works, faith without verbs, is dead,” O’Flynn said. “We think just going to church every Sunday will help by sitting in that one special pew, but that’s not the complete story; it needs a better ending. So many times we get stuck in a rut, not being able to see the path. We think doing the same thing is working, but it’s hindering our growth.”

O’Connor said that it’s time to speak in verbs, for God is calling people to action.

“In the name of God, in honor of the gospel, go forth and do something!” the two concluded.

Following a rousing rendition of “Build Your Kingdom Here,” Muder brought forth a motion for the UNY Conference members to strive to live their faith in God by speaking the truth of God’s unconditional love, by living a life of Christ-like mission, sharing their faith through action in the world. The resolution called for members to work together in Christian love and do something to live their faith. 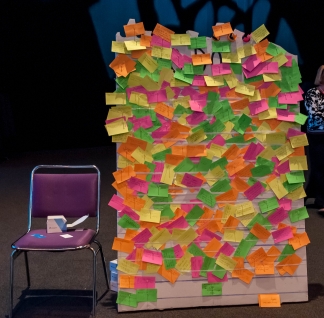 Warren then opened the floor to discussion, asking the audience to write down what God is calling them to do in the next year on the provided index cards. When finished, he asked them to come forward and attach the index card to one of the giant “to do” lists in the front of the room and discuss what is written on their cards as well as the resolution with those around them as they come forward.

As people found their seats, Warren asked the crowd to raise their hands and say “Amen” if they supported the resolution brought by Muder. The resolution was supported.

A chorus of young people broke into song of “Draw the Circle Wide.” Part way through the song, the chorus filtered around the perimeter of the room, and invited everyone to draw the circle wide around the Conference space. The audience did something, encircling the entire Conference space.

“The young adults of this Conference want you to know that you are surrounded not only by our love but by God’s love in this place and as you go forth into the world,” Warren said. “Oh God, as we leave this time of worship, may we be so enthusiastic with the good news of the gospel that we have no choice but to do something!”