Hope in the midst of tragedy

January 7, 2019 / By Shannon Hodson / .(JavaScript must be enabled to view this email address)

Imagine watching your 28-year-old daughter’s health deteriorate over a course of a few weeks. This is what Linda Mauro experienced last September. Her daughter. Brittany Sass, was diagnosed with pneumonia. When undergoing treatment for pneumonia, Brittany began having dizzy spells. Linda took Brittany to the emergency room at Upstate University Hospital.

Diagnostics showed that Brittany had a stroke that was caused by her having a heart attack. She was rushed into three surgeries. First, she underwent the process of taking the pressure off her brain. Once the pressure from her brain was released, it opened the blocked valve in her heart, causing blood clots in her legs. She was rushed into open heart surgery where they were able to pull most of the clotting and repair the damage to her heart. After the open-heart surgery, the medical team attempted to remove the clots from her legs. Because of clotting in her right leg, the leg had to be amputated. 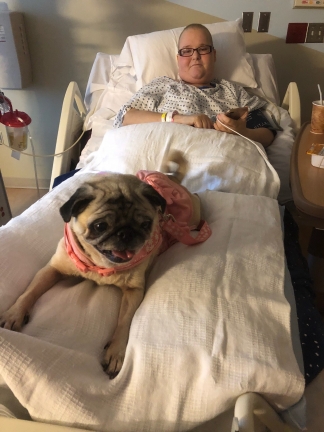 Brittany and her mom both work at Rosamond Gifford Zoo in Syracuse, NY. They live together in Salina, NY.

On Dec. 5, Upper New York Conference Director of Missional Engagement, Mike Block was contacted by Gene Guss, a volunteer at the zoo. Mike said, “Gene told me about the plight that Brittany and her mom were going through and I assured her that we (Upper New York Mission Central and Operation Northern Comfort) could help—that we do these things all of the time.”

Linda said, “I knew that Brittany would be able to come home from the hospital by the end of December and I had no idea how she would be able to get into the house or do simple things like use the bathroom.”

Operation Northern Comfort (ONC) is a non-profit organization based in Central New York that is committed to serving the surrounding communities by providing labor, donations, and support in any time of need. One of the projects they do regularly is build ramps for families, like Brittany’s, who need wheelchair access in their house. ONC has been collaborating with the Upper New York Conference’s Mission Central HUB for over a year, using the HUB to build ramps. Members of several churches across the Conference have then helped install ramps.

As soon as Mike Block was informed about Brittany and her mom, he began his mission to help them. He contacted Linda and asked if it was okay for him to go over and chat and evaluate the house. On Dec. 14, he and Rick Pellote of ONC, evaluated the house and applied for a permit through the Town of Salina. The home needed a wheelchair ramp for the front of the house and the downstairs bathroom had to be widened and completely remodeled for Brittany to be able to access it.

Linda said, “I decided to keep Brittany on the first floor and have arranged it so the living room can be her space.” 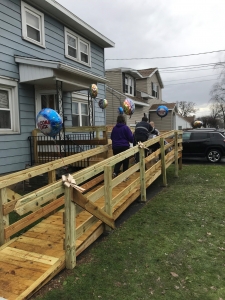 On December 20 and 21, over 15 men, including Mike Block; Gary Bockus, Jerry Sabitas, Mike Myers, and Mike Diordio from Immanuel United Methodist Church; and several volunteers for ONC got to work on the bathroom and installing a ramp at Brittany’s house. Fortunately, earlier this fall, the United Methodist Men from Baldwinsville First UMC had built a ramp at the UNY Mission Central HUB so that saved a lot of time.

The bathroom remodel was more challenging than was expected. It turns out that the wall that the wider door was going to be installed is where all the piping was.

Tom Kibicki of ONC, who was overseeing the bathroom part of the project, said, “This (piping) was a surprise so we have to put the door in (next to the kitchen).” A lot of extra work was needed to complete the bathroom remodel because the crew realized after ripping out the drywall that one of the ceiling-to-floor-beams was one of the support beams for the second floor. They had the additional work of building a temporary beam to support the ceiling while they worked on their remodel.

Linda witnessed the men working for several hours each day with excitement. She said, “These guys are amazing. I can’t believe what they can accomplish in such a short timeframe.”

She was not shy at all about complimenting the crew several times each day.

Mike Block said, “We had to tell her that we’re not looking for accolades, that we are Christians sharing our love and helping our neighbor.” He continued, “We are here to help anybody willing to receive our help.” 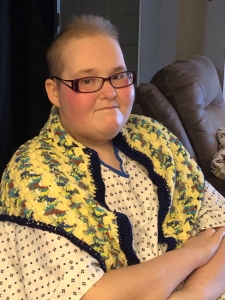 When the ramp was finished, Linda adorned it with several balloons. The town of Salina approved both projects. The bathroom is accessible though ONC and UNY Mission Central HUB will complete the remainder of the work (drywall, painting, and some electrical work) in the coming weeks.

On December 21, Brittany arrived home. She said, “I am very, very happy. My mom and I are both super grateful for everything the Upper New York Mission Central HUB and Operation Northern Comfort has been able to help us with.”

Brittany is slowly becoming accustomed to her new life. Linda said, “This is a work in progress. We’re just trying to figure everything out.”

Giving Brittany Sass access to her house and showing her the UNY Conference’s support with prayer shawls is one example of how so much can be accomplished with by connecting and collaborating with community organizations.

Keep Brittany and Linda in your prayers as they navigate their new life. Their next steps are determining how to transport Brittany and, in the future, hopefully finding a way for her to obtain a prosthetic leg.

Editor’s Note: If you would like to offer support to Brittany and her mother Linda, feel free to call or text Linda at 315-401-8887.