Three men on a mission

December 14, 2018 / By Shannon Hodson / .(JavaScript must be enabled to view this email address)

Power tools echo throughout the entire first floor of 473 Birr Street, located in the Northwest quadrant of Rochester, NY. This neighborhood is home to hundreds of refugees from Burma, Nepal, Somalia, Ethiopia, Togo, South Sudan, and several other countries. 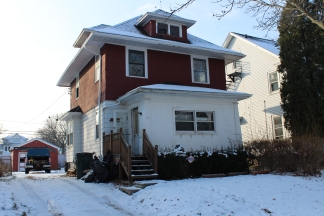 Walt Mathias of Honeoye Falls UMC is using a jigsaw to cut a hole into what will become a kitchen sink counter; Leon Perkins of Rush UMC is drilling screws into the counter, and Peter Baldwin of Ionia UMC is cutting wood with a circular saw in what would be an eventual dining room.

Walt, Leon, and Peter volunteer together rehabbing houses two to three days a week when they are not on mission trips. Walt said, “This is our retirement and I couldn’t think of anything better.”

Leon chimed in, chuckling, “Our wives tell us we go on play dates.”

How did three retired men from three different United Methodist churches come to be a modern-day example of the Ecclesiastes 4:12, “a cord of three strands is not easily broken.” 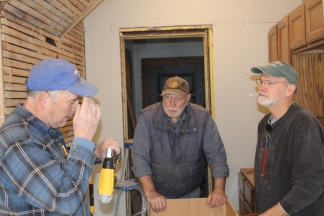 Walt said, “Leon and I first met about four years ago now. Our pastors introduced us to each other. Our church had a team that went down to the Southern Tier (to do disaster relief work) every three to four weeks after the Susquehanna River flooded. The entire area was massively devastated.”

Leon said, “Rush (UMC)had been going to (Louisiana to clean up after Hurricane) Katrina for a number of years, but we decided we wanted to do something local as well, so we got involved down in the Southern Tier with Walt’s church.”

After Walt and Leon met, they immediately clicked.

Walt said, “After we were done with the Southern Tier cleanup, we were brainstorming about what more we could do on a regular basis. The Rotary Club introduced us to Mike Coniff and we got started with the project here.”

Mike Coniff is the Executive Director of the Rochester Refugee Resettlement Services. One of the services this organization provides is housing; they buy foreclosed houses and rehab them for refugees to rent. Some refugees get to a point where they can buy one of the homes.

Mike said, “Rochester Refugee Resettlement has been around for about six or seven years and we work with refugees in a secondary resettlement situation. People have been here a while. We want to try to get them jobs. We want to help their families and kids do well in school and have a career path. One of the major components is housing. It was very fortunate four or five years ago when Walt and Leon showed up at the door because it is virtually impossible to do the work that needs to be done in these houses without volunteer support.”

Peter joined Walt and Leon on their efforts three years ago.

Peter said, “Three years ago, I retired from Kodak. Walt and I share the same pastor. He goes to Honeoye Falls; I go to Ionia. The Honeoye Falls parsonage needed a new kitchen and they were looking for volunteers so that’s where I met Walt and Leon. I volunteered to g 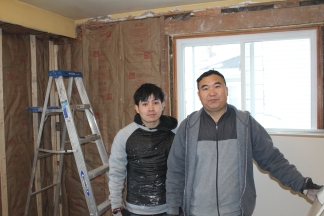 o and help to work on that kitchen and we completely hit it off. I think after the first day, Walt said, ‘Let’s go to the city. We need to go look at a house for Mike (Coniff). ‘”

Peter smiled, and continued, “We’ve been working together on these houses and going on several mission trips together ever since. It’s been a great retirement for us.”

473 Birr street is one of dozens of houses that Walt, Leon, and Peter have completely remodeled rooms from the studs.

Koreh Set will soon be the owner of this home. He is one of the refugees employed by Rochester Refugee Resettlement Services to help rehab homes. He had zero construction experience prior to this position.

Koreh said, “I’m from Burma. When I first moved to America, I lived in Tennessee. Then, in 2016, I moved from Tennessee to Rochester. Before I came here, I learned about Rochester Refugee Resettlement, so I went to meet Mike Coniff. He asked if I needed a job and I told him that I did. He asked if I could help fix houses and I said I can learn. This is the first time I learned construction. I used to drive a big truck, delivering green beans. I learn quickly and now I can do drywall, painting, and ceiling work.” 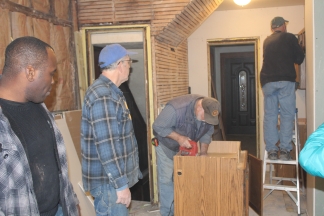 Another refugee that works on homes for Rochester Resettlement Services in a leadership role is Djifa Kothor—he first volunteered at the organization after college and then was hired to help with the remodeling. He came to the Rochester area from Togo as a 12-year old in 2000; an interesting connection is that it was Honeoye Falls UMC that sponsored Djifa and his family. This was before Walt was a member.

Djifa said, “Walt, Pete and Lyon are like saviors…the three of them are just amazing. For them to drive far (from outside Rochester’s city limits) whether it’s a snowstorm, heat, or whatever is just incredible. And they have helped Koreh so much. Without them, I don’t think we would have acquired as many properties as we have and keep them up to code. They are the best volunteers you could ever ask for so I’m beyond thankful.”

The relationship that Walt, Leon, and Peter have showcases the beauty of the United Methodist Connection. Their good work demonstrates one way that the Upper New York Conference is fulfilling its vision to be God’s love to our neighbors in all places.