When did you last use an offensive term referring to someone of another race? Refuse to sit next to a person at church whose skin color is different from yours? Told a racist joke?

It's probably been a while—or maybe you've never done these kinds of things. Because as Christians, that's just not how we behave. And in the U.S., that's how white people tend to see racism – as individual acts of discrimination and prejudice. People who commit hate crimes are "bad people." If you don't use racial slurs or commit a hate crime, you're one of the "good people." 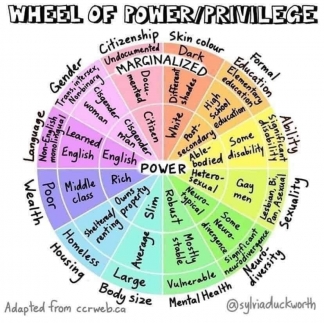 Unfortunately, it isn't that simple, and acts of individual racism are only a small part of the problem. Racism goes way beyond cross burning or not hiring someone because of their skin color. It's deeply embedded into the normal functioning of our society, showing up as discriminatory treatment, unfair policies, or biased practices, all based on race.

Years ago, Jim Crow laws legalized racial segregation. Although these laws are no longer on the books, there's a basic structure in place, and it stands to this day. This is institutional racism, and it's entrenched and usually invisible to white people in institutions such as businesses, government, housing/real estate, employment, news media,  banking/finance, healthcare, education, and the law enforcement and judicial systems. Unlike individual racism, which is easier to address directly, institutional racism is embedded within the historic and current fabric of our society. And because entire organizations are involved, institutional racism negatively affects People of Color on a large scale.

But we passed civil rights legislation, and repealed Jim Crow laws, right? So why does institutional racism still exist? There are two factors.

The first is implicit bias, which comes from the messages, attitudes, and stereotypes we pick up from the world we live in. They're unconscious preferences for one thing over another. For example, in many career-related stereotypes, unconscious bias favors men over women. However, our world is full of excellent male nurses—and physicians.

So it's no surprise that race is a prime area for implicit bias. Implicit racial bias tends to work against the same groups that are the victims of overt racism from white supremacists, or the bigotry of people who actively defend racial and ethnic stereotypes.

Remember, though, that because  these biases are unconscious, they can affect the minds of "good" people who would honestly say that they are horrified by racist attitudes. That's because the implicit associations we hold often don't align with our declared beliefs. Implicit biases have a profound effect on:

The second factor in creating institutional racism is power, power that grows when these institutions or processes are carried out by people—"good people"—who are in charge. Since the inception of our country, white men have been in charge. And People of Color have been consistently devalued in our society by the white population. As late sociologist Arthur Stinchcombe explained, “The key to institutionalizing a value is to concentrate power in the hands of those who believe in that value.”

How does all this play out for People of Color? Let's take a look at a study published in 2016 regarding employment. In it, researchers created resumes for Asian and black job applicants, sending the resumes to 1,600 entry-level U.S. postings on job search sites in 16 different metropolitan areas. These resumes included contact information so that the employers could reach the applicants. While some of the resumes made no attempt to hide the race of the applicant, others were ''whitened''—altered so that it was not apparent that the applicant was a Person of Color.

The ramifications are dramatic. You can't build wealth without steady, rewarding jobs. As a result, you may not be able to afford to live in a community with quality schools, and access to grocery stores, transportation, parks, or safe environments. Poor education further limits job prospects. Oh, and without steady employment you can't afford healthcare, which leads to poorer health outcomes—further limiting upward mobility and economic opportunity.

All of these institutions are interrelated. Working together, they create a system of racism, or systemic racism.

This system of unequal power gives privileges to white people—and profound disadvantages to People of Color. Because in this system, white people have the power. "Good people" like us.

So, while white people may not be committing individual acts of racism, we are most definitely a part of the many institutions that create systemic racism. And we can help dismantle it.

If you want to find out more about just how to do this, we invite you to experience the Imagine No Racism (INR) Small Group Curriculum. It's meant as a starting point, a set of small-group sessions to launch the ongoing work of addressing, and ultimately, dismantling racism. You can find out more about it on  the Conference website: https://www.unyumc.org/ministries/imagine-no-racism.