Port Byron UMC celebrates the lives of their centenarians

February 19, 2019 / By Shannon Hodson / .(JavaScript must be enabled to view this email address)

Port Byron UMC has two centenarians in their congregation—and both of their names are “Ted.”

On Sunday Feb. 17, 2019, the church held a 100th birthday party for Ted Eiben. Church member Ron Mills lit the birthday candles for Ted, mentioning how devoted Ted has been to the church. Ted has been a member of Port Byron UMC for 22 years, having been introduced by his late wife. His step-daughter Suzanne Moose said, “He has more energy than almost anyone I know.” 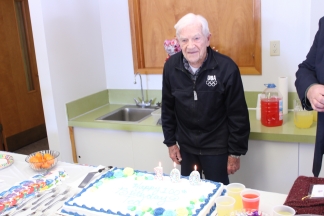 Ted Eiben enjoys writing snail mail letters to his nephew in Alabama. His nephew served in the Air Force and now works at NASA. Ted, a World War II vet, said, “It’s nice knowing I have someone who enjoys hearing from me. Apparently, I share wisdom with him.”

When asked what advice he would give to the generations younger than his, he said, “It’s all about patience. Be very patient with everything,”

Major Ted Wilt is 101 and he was visibly very happy at Ted Eiben’s birthday celebration. He is also a World War II vet. One reason he was smiling is because he got a hearing aid for his right ear three days ago and could hear what everyone was saying clearly.

His daughter Kathy Wilt, a Baptist minister, was with him. She said, “He had been in denial about hearing loss in his right ear for decades, but finally decided to get a hearing aid last week.”

Ted Wilt said, “It’s amazing—I can even hear soft voices. Background noise used to bother me, but not anymore. Now the only thing I really need to feel young is two new knees.”

Kathy shook her head laughing and said, “Do you believe this? He’s 101 years old and wants knee replacements. Have you ever heard of such a thing?”

She continues, “He has such a positive attitude and that’s what keeps him going.” 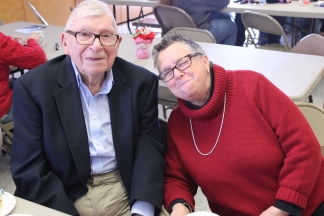 Ted Wilt has been a member of Port Byron UMC for 75 years. He cracked a grin and said, “I’ve seen a lot of changes…most for the good. I actually helped built this building we worship in in 1970.”

Ted Wilt still lives on his own. Aside from getting help from Meals on Wheels, he takes care of himself. He said, “Why would I want to give up my home and my beautiful yard?”

When asked what advice he would give to younger generations, he said, “You just have to live a pretty clean life—that’s all.”

Does your church have any centenarians? If so, send photos and any words of wisdom they have by emailing news@unyumc.org.