September 3, 2014 / By Beth DiCocco / .(JavaScript must be enabled to view this email address)

Leah Robinson, Finance Team Support, will retire from the Upper New York Conference on Sept. 5, 2014. She's been with the Conference since it formed in 2010, having worked for the former Troy Conference.

Much of her work here centered around Annual Conference registration and collecting data from local churches for the statistical reports.

Robinson said she regularly fielded questions on a variety of topics from statistics and insurance to how to register for Annual Conference, and being able to help districts and local churches is the most rewarding part of her job. 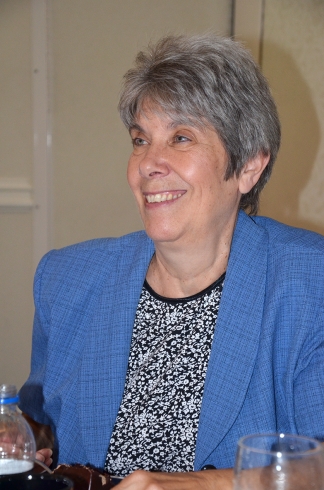 "It's gratifying to be able to answer people's questions," she said. "A few people are very appreciative, and it's nice that they recognize that you've helped them out."

Her day could include a lot of different tasks, and she said, "I've tried to support whatever the Finance Team needed to have done."

At a luncheon for Robinson on Aug. 28, the Rev. Bill Gottschalk-Fielding, Director of Connectional Ministries, talked about how Robinson's presence alone contributed much to the young Conference.

“In the early days of our new Conference, as we were struggling to build trust among members of our four predecessor conferences, Leah’s presence on Conference staff was a great blessing," Rev. Gottschalk-Fielding said. "Folks from former Troy knew and loved Leah from her days on Troy’s staff and were comforted by a familiar face and voice. Folks from former North Central, Western and Wyoming who got to know Leah quickly came to realize what a gift they’d received. She was a friend we all shared, and it helped bring us together."

Robinson's work for the Annual Conference began on March 26, 2006 when she began serving as Assistant to the Treasurer for the Troy Conference.

When the Troy Conference merged with three others to become Upper New York on July 1, 2010, she officially became an employee of the new conference, but retained her former title and continued living in the Troy area until the end of 2010 to help with the transition.

After relocating from Glens Falls to Cicero, where she now resides, Robinson became Administrative Assistant to the Upper New York Treasurer/Director of Administrative Services on Feb. 1, 2011. In November 2013, her title changed to Finance Team Support.

Overall, she said, "I hope I've been able to make some kind of valuable contribution to the Conference and to the work that we do."

A New York state native, Robinson spent most of her childhood in Cooperstown. She attended SUNY Oswego, where she earned a degree in education (she later earned a master's degree). She taught third grade for three years in the Shenendehowa Central School District in Clifton Park.

She left teaching when her children were born. She has a son Nate and grandson Kevin, who live in Sweden, and a daughter Becca, who lives in Florida.

For 25 years, Robinson and her husband ran a marina on Schroon Lake in the Adirondacks.

The work was 24/7 from April to November, Robinson said, but she enjoyed being on the water and the friendships she made with their long-time customers. And being self-employed allowed her to set her own schedule and gave her more time with her children during the school year.

"The time was more flexible, even in the summer," she said.

Leah Robinson's co-workers wished her bon voyage in retirement by decorating her desk as the USS Leah. Photos by Christian Vischi.

Having flexibility is something Robinson is looking forward to in retirement – even if she hasn't settled on exactly what she'll do with it.

"I haven't really decided," she said, though she does plan to stay in Cicero for the time being. "I just need to experience being retired for awhile and see what I want to do. I need to do some of that good Methodist word: discernment."

And while she has no firm plans, Robinson said there are some things she's been "putting off" that she may use her new-found freedom to get to now.

One of those is a return trip to Australia, where she spent time as a high school exchange student.

"I really want to go back," she said. "I always envisioned going a lot sooner than this, but life happens."

She liked Australia so much, in part, because "Australians are very open; they have a great sense of humor. They'd call me 'the Yank,' and then apologize right after."

Robinson said she set up a Facebook page in January to find a person that she'd lost contact with; they had corresponded for 20 years, but then lost touch. She found the woman and her son.

Her other potential travel plans include less flying and more driving.

"I don't know if I'll be brave enough or be able to afford to do it, but I'd like to get a little RV," she said. Her parents had traveled this way in their younger days, and she enjoyed joining them on some trips.

An RV also would be a convenient way to travel with her 2-year-old miniature schnauzer/Bichon Frise mix Sophie.

Even if they don't hit the road, Sophie loves walking the neighborhood and greeting everyone she meets.

"She helps me get my steps in," Robinson said, referring to her Virgin Plus HealthMiles. "I tell her, 'soon I won't have to leave you all day.'"

Back at home, she plans to spend more time quilting – a hobby that's evident to anyone who's stopped by her desk at the Conference, where she would frequently change the quilted panel that served as a backdrop to her cubicle to reflect the seasons or holidays.

And if she runs out of ideas, Robinson said she can count on Cicero UMC.

"My church will keep me very busy," she said.