Who says you can’t launch a New Faith Community in a pandemic? hope@central just did, and the story of it getting there is a wild ride—at least as experienced by its Core Team.

First, the backstory: More than two years ago, the leadership of Central UMC in Endicott (Binghamton District) began talking with me, their pastor, about crafting a vision for the future. Located in a deeply depressed area, in a rapidly-shifting neighborhood, with strong mission DNA, and a long history of work on justice issues, including a new identity as a Reconciling Congregation, their question on behalf of the congregation was, “what’s next for Central’s future?”

A Vision Team explored questions of demographics; attendance patterns; location; need; people, time, and money resources; wild ideas; and big dreams, all rooted in a stated commitment to “offer hope to Endicott and the surrounding area. There was a clear understanding of the necessity for the hope God offers in Christ in a place and time like Endicott, for that moment and beyond. They created RenovateCentral, which looked at all aspects of Central’s ministry and began reconsidering and refitting the building for different uses, creating a specific social media presence and strategy with dedicated staffing, and reimagining mission, service, and faith formation. They even began a committee to restore the organ.

It also became unexpectedly clear that part of the RenovateCentral work should include developing a New Faith Community—a church-within-a-church, designed to reach people a traditional church could not, for various reasons. This wild idea actually started to make sense when things started falling into place to make it happen—people with specific skills and gifts started showing up and an unexpected money gift appeared, among other things. The Vision Team all recognized the movement of the Spirit and brought the proposal to the Church Council for consideration and prayer.
One month later, the resolution passed, incidentally on the very same day as did the Organ Capital Campaign resolution—that was a very big night at Central, affirming the work of the congregation both as it was, and as it could be. As work continued on the RenovateCentral initiatives, a core team was developed for this new thing, shorthanded “Central2.0,” which grew its purpose and vision. 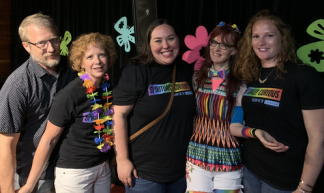 The Central2.0 Core Team grew almost instantly to 11 people, ranging in age from their 20s to their 60s, with backgrounds in traditional, evangelical, and none-in-particular churches, some from Central, some not, all committed to and heavily invested in developing a new and different experience of faith. The team worked for almost two years on identity, purpose, intention and mission, all based in Central’s inclusive ministry and mission DNA, yet going beyond it to create a boldly progressive new congregation with the hallmarks of “fearless authenticity,” and “spiritual curiosity.”

One year in, a consultant joined the staff and coached the team through some of this work, which included difficult conversations together about theology and church, worship and music, prayer, and evangelism. Important questions emerged:

With team members from all over the map on these issues, the work was deep, sometimes painful, yet always fruitful. Those conversations continue as the team explores what it means to create a church that hopes to be all these things in order to offer the good news of Christ to the community and the world around it.

The team soft-launched (by invitation) worship in December 2019, during which the new church’s permanent name finally emerged and became clear: hope@central. Soft launch worship happened in January 2020 and again in February, and the team was aiming for a hard launch (wide public launch) during Easter week. The COVID crisis interrupted the plan and threatened to derail progress, but God was at work again. The team stalled for a hot minute, then decided to launch via livestream—in fact, to create hope@central as an online presence, which will eventually include in-person attendance opportunities. The budding small group switched to meetup, Core Team sessions shifted to Zoom, social media amped up, and the first livestream worship launched on YouTube on Saturday, May 2, after a fast four days of reformatting and planning. In a classic Holy Spirit move, the launch ended up happening on the third anniversary weekend of Central’s becoming a Reconciling Congregation.

Launch night attracted 123 viewers, and at this writing, 167 persons have watched it. The team plans a worship experience the first Saturday of each month at 7p.m. but keep up with our Instagram for each month’s final date. The past videos are located (for now) on the Central UMC Endicott YouTube channel, listed by date.