Just off Exit 28 on the New York Thruway, I-90, there are three truck stops. The largest, TA Truck Stop in Fultonville, was where the Fonda-Fultonville United Methodist Church held Christmas Eve Services.

or 15 years ago, said Pastor Amy Winne. “They came out for this Christmas,” she said. During the service, many customers decided to stay for the 35-40-minute service.

“We ended the service with Silent Night. I told them if they wanted to snuggle up to someone, they should feel free to do so,” she said. At the beginning of the service, the congregation bought drinks for those at the restaurant. Those who wanted to order something to eat were absolutely welcomed to do so.

It was a wonderful way to end what was a particularly stressful year. The church building went up in flames in March and the pastor died in May, “she said. Following the fire, Upper New York Area Resident Bishop Mark J. Webb had recommended the church look at Compass Church Discipleship Study.

Appointed to Fonda-Fultonville UMC in July 2017, Winne said they had been reading the study that asks the church who they are and who God wants them to be. The church could no longer expect people to come to them. Instead, the church needed to go out and meet the people.

“Most people aren’t going to come [to church] unless someone invites them and builds a personal relationship with them,” Pastor Winne said, adding she thought it reinforced the study that they need to get out into the community and that doing so can be effective.. 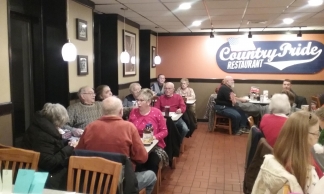 It was one of the parishioners, she said, who thought outside the box to come up with the idea of holding Christmas Eve Services at TA Truck Stop. The congregation was skeptical.

“They didn’t think the Christmas Eve service would attract many. They didn’t want to be disappointed.” she said.

What happened when the truck stop manager was asked to let the church hold its Christmas Eve Services in the restaurant shocked everyone. “He asked what we would think of holding monthly services,” Winne said. “It’s a popular place to eat in the community, a wonderful restaurant.”

That, and later seeing how many people showed up for Christmas Eve gave the congregation a boost. “It reinforced what they were learning in the study,” she said.

The church had already become more visible in the community when, after being left building-less when the church burned, they began holding weekly services at the Fonda Town Hall.

Currently, a service held at the end of January is being planned.