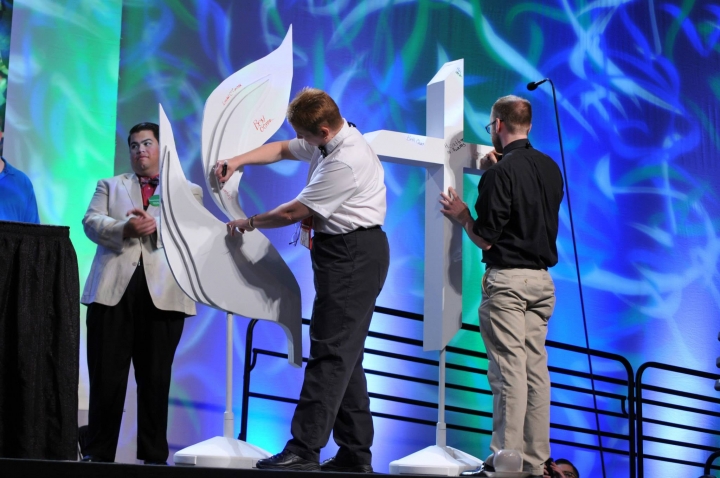 Young Adult Ministry led morning worship on Thursday, May 28, at the 2015 Annual Conference session. As Laurel O’Connor, field coordinator for Africa 360, said, “It’s all about how we tell the story … a Biblical story told not as much by words but by actions.”

So that’s exactly what one young adult did: took action.

Theresa Eggleston acted out the stories of Moses and Joshua from the Book of Exodus, where Joshua fought Alamek, Aaron and Bur helped Moses hold up his staff at the top of the hill, and Moses received the tablets from God.

Pastor Ben O’Connor, appointed at the Lycoming United Methodist Church, spoke to these stories, emphasizing that, “We are in the middle of the story, somewhere between the beginning and Amen.”

Pastor O’Connor said it’s the story that starts with God creating something to be in relationship with God's people.

Pastor O’Connor pointed out that Moses needed Joshua to watch his back, and Joshua needed Moses to teach him how to read a crowd, similar to how we need each other. One example of improving through working together is a relay race, where what we can accomplish together trumps what we can do alone.

And that’s where a visual representation of #PassTheBatonUNY comes in. Mentors and mentees have the opportunity to pass a symbolic baton to each other (and others at AC session); mentees sign their mentor’s name in black on a white-painted wooden cross and mentors signing mentees names on a white-painted wooden flame, with the hope that both will be covered by the end of AC session, thus depicting the denomination’s logo. It is a way to recognize mentors and thank them for their support.

Worship also included lively Christian rock music and a Nigerian song sang in both English and Yoruba languages led by Ian Urriola, and the presentation of the mosquito net superheroes fundraiser for Africa 360.