On Friday January 20, I had the great opportunity to go to the Stanley Theatre in Utica and listen to Margot Lee Shetterly (pictured on the right) speak about the book she recently authored entitled Hidden Figures. It’s about a group of African-American female mathematicians 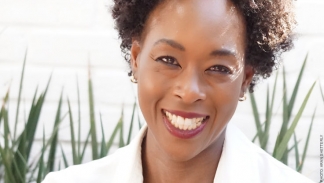 working for NASA during the 1960s, in segregated Virginia. Ms. Shetterly, also African-American, grew up in the same area as these women. Her father worked at NASA and had told her about them, so she was moved to research and interview and write an accurate and compelling account of their contributions. It focuses on three particular women of the group of African American women working at NASA at the time.

On Saturday, I saw the movie, also entitled Hidden Figures, based on the book. It was great! Russia had just beaten the US in putting a man into orbit around the earth, so NASA was desperate to catch up. The engineering department requested the best mathematician be sent to them to help (This was before computers)! You can imagine the scene when an African-American woman walks into the room full of elite Caucasian men! The movie accurately portrays the prejudice and Jim Crow laws in effect at the time. To use the ladies room, she literally ran a quarter- mile to the only building on the complex that had a “colored” ladies bathroom. Did I mention she did it in high heels? Then she ran a quarter- mile back.

What amazed and saddened me was these women were brilliant, confident, and driven to succeed. But at work, they had to assume a subordinate role and endure being treated as inferior by the men and women they worked with.

The theatre was filled, with mostly Caucasian folks, and there were two rounds of applause. I sincerely urge you to see the movie. Please take your family, including your kids, and your friends and congregation. And then read the book.

Editor's Note: Linda Hughes is a member of the Upper New York Conference Commission on Religion and Race.