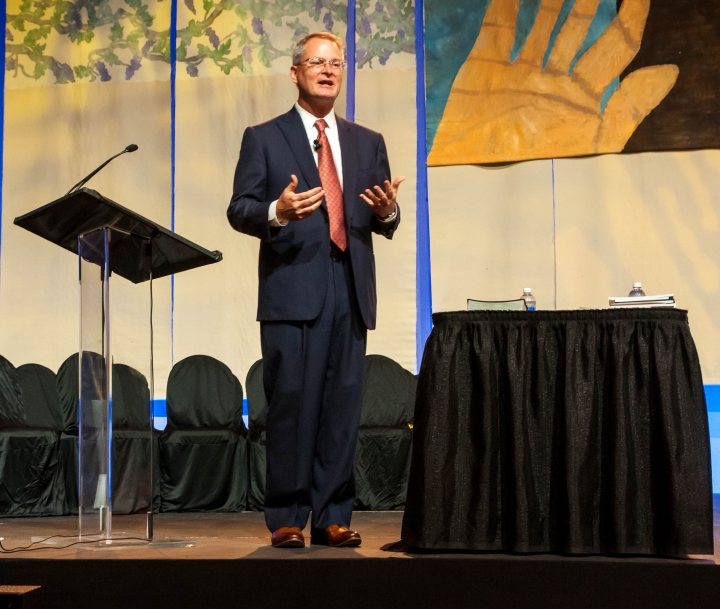 Day two of the 2016 Annual Conference session began with Study Session leader the Rev. Adam Hamilton, founding pastor of the United Methodist Church of the Resurrection in Leawood, Kan. He led the Conference in three 90-minute training sessions throughout the day on June 3.

Rev. Hamilton started the United Methodist Church of the Resurrection in 1990 with three other people – his wife, LaVon, and their two daughters, Danielle and Rebecca. It has since grown to more than 18,000 adults and children as of 2014 under his leadership. Rev. Hamilton has published 22 books – including “Leading Beyond the Walls.” He is a graduate of the Perkins School of Theology at Southern Methodist University in Texas, where he received the B’nai B’rit Award in Social Ethics.

Upper New York Area Resident Bishop Mark J. Webb welcomed Rev. Hamilton to the Conference and gave a brief introduction. Then Rev. Hamilton took the mic and began the first session with prayer, followed by describing what each session would cover – the first session, focusing  on what makes an effective leader, what leaders do, unleashing the power of laity, and five key leadership principles.

He told the crowd that today might feel like “drinking from a fire hydrant” because of all of the tips and information he would convey, but encouraged everyone to find at least five good ideas from each session to implement within their own church or within themselves.

Rev. Hamilton said that today is a different time for the Church.

“The approach that worked in the past may not be the one that works in the present,” he said. “If we keep doing the same things without any change, we are going to see our churches get smaller and smaller. If we are going to reach new generations of people, we need to figure out how to connect to people who don’t go to church and bring them in.”

And step one towards that end is creating effective leaders.

Rev. Hamilton asked the crowd to make two lists: one with traits of a good leader and the other with traits of a poor leader. Then he told the crowd some of the effective traits that he identified, starting with humorous examples: brushes their teeth, wears deodorant, and irons their clothes and later stating that good leaders are authentic, possess integrity, initiate conversations, encourage other people, radiate possibilities, and can laugh at themselves.

And his advice with regards to the lists everyone made: Do all the stuff on the good leader list, and don’t do what is on the bad leader list.

Throughout the presentation, Rev. Hamilton used videos to illustrate his points, including a video where he had a slip of the tongue during a baptism that demonstrated leaders must learn to laugh at themselves and a video about then 10-year-old Cooper – who had a vision to raise money to build a water well in Malawi and has since raised $10,000 for the project – which demonstrated the power of the vision.

Rev. Hamilton also described the role of leaders. He said leaders set the tone of the organization, clarify and champion the mission and vision, hold the organization accountable to accomplish the mission, are responsible for preparing the organization for the future by leading change, and evaluate and celebrate victories, while also addressing shortcomings.

Rev. Hamilton briefly discussed unleashing the power of laity, using the example of his church’s congregational care ministry, where laity work as associate ministers to go over prayer requests, visit people in the hospital, and attend funerals and weddings.

The first session concluded – and the second session began – with the five key leadership principles.