Commission on a Way Forward report at UNY Annual Conference 2018

The Commission on a Way Forward (Commission) was formed by the Council of Bishops (Council) after a decision was made at General Conference 2016 to develop a committee to address the issue of division around the topic of human sexuality in The United Methodist Church.

The charge given to the Commission was to “design a way for being a Church that maximizes the presence of a United Methodist witness in as many places in the world as possible, that allows for as much contextual differentiation as possible, and that balances an approach to different theological understandings of human sexuality with a desire for as much unity as possible.”

The Commission worked together to create a report to present to the Council of Bishops. Based on this report, the Council will bring a recommendation to the special session of the General Conference to be held in February of 2019.

Upper New York’s (UNY) Dr. Scott Johnson was one of the 32 people selected by the Council across the Global Connection to be a part of the Commission. At the 2018 UNY Annual Conference, Scott discussed the hard work that went into creating the Commission’s report.

First, Scott dissected the charge so that the UNY Conference members stating that it would help contextualize the recommendations made to the Council

Scott said, “First is the goal of maximizing the presence of a United Methodist witness. In a world that often doesn’t acknowledge its brokenness or doesn’t see the Jesus as the solution when it does, the United Methodist Church has a distinct voice in Christianity. Our theology of grace and our commitment to living the gospel offer meaningful differences from theologies driven by false promises of prosperity or rooted in fear.”

Scott continued, “The second key element is contextual differentiation. Being that we are a global church, there are United Methodists who live in parts of the world where national and cultural attitudes vary differently. In addition, every faith community must be faithful to its call and aware of its 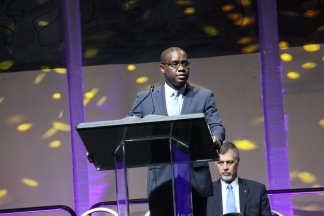 setting. The desire to be nimble enough to empower effectiveness mission is critical.”

Scott concluded the dissection of the charge with a third point, “Lastly, is the repeated use of the phrase ‘as possible.’ With all that we hold in common, we are not of one mind about LGBTQ inclusion. Our readings of scripture, our interpretation of tradition, our multiple attempts to reason together, and our experiences have led us to different places in this conversation. Many of our United Methodist Connection have studied and discerned their positions intentionally. The debate has been long, exhausting, and many people have been hurt by the Church as it has unfolded.”

Scott explained how effective the Commission was in doing the work they set out to achieve through their nine meetings. He said, “The Commission was intentional about creating an environment in which we could have very difficult conversations with deep trust so that whenever difficult moments arose we could persist in Christian love. I am deeply grateful that we invested considerable time in prayer, Bible Study, and fellowship. Another resource that was helpful in our work was the Anatomy of Peace. This helped us move beyond conversations that were superficially polite, and even we struggled mightily, we were able to remain engaged. Over the past 18 months, we developed a genuine sense of team that relied on the diversity of gifts and perspectives around our table.”

The report given to the Council recommended three possible plans: The Traditionalist Plan, The One Church Plan, and The Connectional Conference Plan.

The report written by the Commission on the Way Forward will become public in early July. Scott said, “I know that it’s hard to ask for patience until the report becomes public. There is an urgency for people trying to determine whether the church they love can still be their home. There is an urgency for LGBTQ sisters and brothers wondering whether they can be authentically at home anywhere called United Methodist. There is an urgency for a connection that seeks to bear witness to a God of love, hope, and joy to a hurting world, but cannot free itself from its internal struggles. Even with these powerful drives pushing us to get to this work, we must remember that there is a difference between going fast and going the right way.”

After Scott completed the report, Bishop Webb said, “Once the report has been published is available, we hope to then provide opportunities (dates, times, and locations) starting in September going though the end of January or middle of February where myself, Scott and others will be a part of listening, conversations, study groups, and various ways in which we can engage in this process together.”

Bishop Webb then explained how he and Scott already met with delegates to the special session of General Conference and invited them to consider how they will be part of the conversations.

Bishop Webb encouraged churches and Districts who are holding prayer groups dedicated to the Way Forward to continue to do so.

The General Conference will be held February 23-26, 2019. Bishop Webb described a Way Forward prayer initiative that relates to this date. He said, “We’re asking individuals that every day from 2:23 to 2:26 to pray; pray for God to breakthrough. Pray for the United Methodist Church to follow the direction that God is calling us.”

The Commission on a Way forward report concluded with a time of prayer.