It was 9 a.m., and Chaplain Captain the Rev. Keith Manry received an email from his supervisor notifying Rev. Manry of a meeting in the commander’s office in one hour. When he entered the office, he saw his commander standing with a piece of paper, a letter from the Chief of Chaplains stating that Rev. Manry was the 2014 Chaplain of the Year. Two weeks later, he received the award at a wing staff meeting. 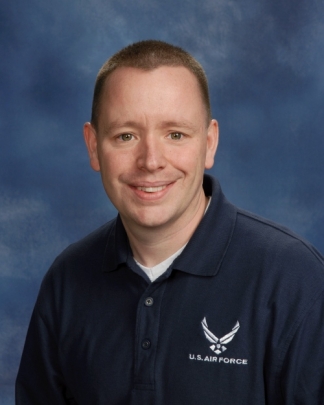 “I was in shock and incredibly grateful,” said Rev. Manry, an elder of the Upper New York Conference who’s most recent in-Conference appointment was at the First United Methodist Church in Akron in the Niagara Frontier District.

Rev. Manry received the 2014 Edwin R. Chess Award, which is given annually to one company-grade officer who best displays the United States Air Force Chaplain core values of “glorifying God, helping airmen, and pursuing excellence.” He was recognized for his work at both Malmstrom Air Force Base in Great Falls, Mont., and Bagram Airfield in Afghanistan.

Rev. Manry said “the opportunity to exercise the gifts and graces God has given me in the deployed environment” distinguished him.

He recalled two instances where he was able to utilize God’s gifts. A 12-year-old Afghan girl had been badly injured by a rocket attack on her house. During his time with her and her father, Rev. Manry discovered their home had been destroyed, and they couldn’t afford the $1,000-rebuild cost.

“My heart wanted to write him a check or find a way to give him the money,” Rev. Manry said.

He reached out, starting with military channels, to figure out where he could get help. The state department sent a team to do an investigation of the village and awarded the family a $5,000 grant to rebuild their home and purchase new belongings.

On another occasion, the Bagram Airfield received a young girl with intestinal issues, who had surgeries in India, Pakistan, and the airfield’s Heathe N. Craig Joint Theater Hospital. None of the surgeries corrected the problem, and there was little the airfield could do for her. An ethical committee, chaired by Rev. Manry, decided to provide comfort care that she would not have been able to receive in Afghanistan.

“I would spend late nights with her,” he said. “I would play the guitar and sing to her at night to put her to sleep and support the staff while we watched this little girl die. Moments like that were incredibly sacred and I knew that God was present … I never felt like I was needed more or that my presence mattered more than it did in those moments.”

Rev. Manry has also been very involved with Holy Joes Café, a free coffee outreach program for troops. He first learned of the ministry during his time in Connecticut, where he discovered Green Mountain Coffee donates K-cups and Keurig machines to soldiers.

“The ministry takes those donations and sends them to deployed troops, particularly to allow relationships to be built between the chaplains and the troops, so that conversations can take place in a natural way,” he said.

Since then, he coordinated shipments of more than three million K-cups, which have been delivered to chaplains of various branches of the armed forces.

He’s utilized this ministry at Malmstrom, where troops are deployed to the missile field on a daily basis.

“I felt like, in many ways, that they are deployed; they’re just not deployed overseas. They’ll go out for five days, come home for three days and then go back out for five days,” he said. “I felt like that a lot of what I did in Afghanistan with the coffee ministry could also be accomplished here.”

In addition to Holy Joes, Manry also ran the Detour, a chaplain-sponsored airmen’s ministry center at Malmstrom. The center provides pastoral care for airmen by offering amenities they otherwise would not have. For example, it has a pool table, foosball, air hockey, theater, kitchen and recording studio.

“It’s not an environment where they get preached to,” he said. “The chaplains hang out with them; it allows them to communicate with us in a non-threatening way. It builds relationships with us.”

Rev. Manry highlighted the support of his wife, Erica, saying that she deserves the award even more than he does.

Rev. Manry left on July 1 for a new appointment at Andersen Air Force Base in Guam and will be there for two to three years.

“I anticipate that I can especially support the airmen that are deployed there,” he said. “Guam is a very expensive place to visit, and they’re limited on their ability to get out and do things. I’m hopeful, as a chaplain, we can provide outings and other events that can help build morale and care for those young airmen while we’re there.”