November 25, 2019 / By Shannon Hodson / .(JavaScript must be enabled to view this email address)

Almost a month after the Halloween storm and subsequent Sauquoit creek flooding throughout the Mohawk District, many residents are still without heat, water, or electricity. Over 100 residents experienced flood waters that filled their basements from floor to ceiling and up to the top of the floorboards or higher on the first flo 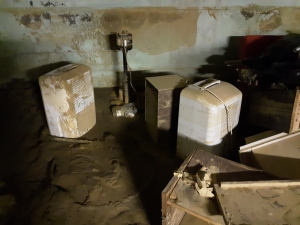 The village of Whitesboro was hit hard by this storm. A walk down Wind Place and surrounding streets illustrated the severe damage done by this storm with 20 homes condemned because of blown-out foundations.

Since Nov. 3, the Upper New York Conference ERT (UNY ERT) joined forces with the Red Cross and Rubicon to begin the massive cleanup that was needed. Residents could call 2-1-1 to request help with issues of mud and mold cleanup as well as debris removal and they were added to the list of hundreds of residents for the UNY ERT to call and schedule an assessment and a team to go to the residence to help however they could.

The UNY ERT has since requested volunteers of all skill levels to come out to the Utica/Rome area to help. On Nov. 20 (three weeks after the storm), Mike Block, UNY Director of Missional Engagement, expressed how great the need is. He said, “There are 139 homes needing our teams...Please come and help.” Teams have come in from Pennsylvania and Massachusetts Districts to help with the effort.

Not only have the flood survivors lost basic needs of heat, electricity and in some cases, their entire home, but also so many have lost all hope—many people had finally recovered from a storm with nearly as much flooding 18 months ago.

The UNY ERT is restoring hope.Lois’s entire basement flooded. Lois is an elderly widow and lives alone in Holland Patent, NY. A team of 12 UNY ERT members as well as Pennsylvania and UNY volunteers removed an immense amount of mud and debris from her basement on Nov. 20.

Lois said, “I was amazed at the number of people that showed up to help me! I couldn’t believe how many people came and how far they came from. It was astonishing to me how organized they were and how well they worked together and that these people didn’t even know who I was and many of them didn’t know each other before they took on this project of my house.”

She continued, “They knew exactly what to do…and beautifully finished the work in two hours. I was absolutely flummoxed.”

In a state of reflection, Lois smiled and said, “It was a miracle to me…it was truly a God-send.”

The UNY ERT and volunteers have even helped people whose homes they were unable to yet go into.

ERT member and UNY Conference Mission Volunteer Coordinator, MaryBeth Ingalls, ERT member Merilee Devoul and ERT member Nancy Cooper came to check on Jeff frequently to see how the UNY ERT could help. Jeff said, “They have been by my place four or five times. I don’t have water yet, but they keep coming hoping they can help me. Even though I don’t have water, they bring me sandwiches and other necessities and they come in handy because I can’t even cook cheap things like rice and pasta because I don’t have the water to cook them.”

Jeff expressed how the ERT has helped him mentally and even spiritually. He said, “They are angels; they come in and they just make you feel better. They make me feel like I can fight again. Their enthusiasm is contagious. It’s not a chore to them; they want to do it! And even if you don’t want the help; they are persistent in offering help. It’s amazing.”

Jacob’s house was condemned because of a blown-out foundation. With the help of a contractor, he decided to get to work fixing the foundation so that eventually the ERT or other volunteers could help him with the cleanup needed inside. On Nov. 21, MaryBeth Ingalls and just-trained ERT Darci Leizer of Mechanicville UMC came to check on Jacob as he was outside doing his work. They offered Jacob words of encouragement and a prayer shawl, which he graciously accepted.

MaryBeth said, “This shawl has been prayed over by a group of women who made it.”Jacob smiled and responded, “I’ll wrap it around me like it’s a hug.”

And then MaryBeth offered a real hug. 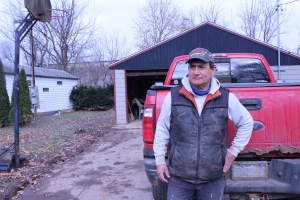 Jacob expressed gratitude for the commitment of the UNY ERT. He said, “You guys always show up and just knowing you are here helps me keep my faith in God.”

Help is still needed in the Mohawk District and it doesn’t have to be cleanup help; it can be making phone calls, knocking on doors, or making prayer shawls. If you would like to help, call Roger Cullen, UNY-VIM Co-Coordinator, at 585-857-3140.