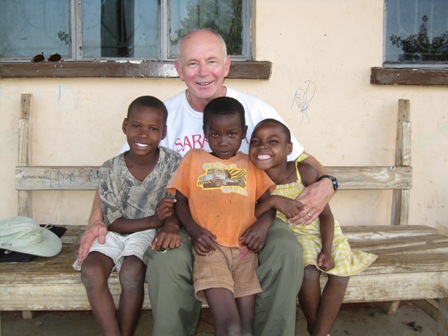 Retired pastor and his wife embark on ‘year of adventures’

January 16, 2014 / By UNY Communications / .(JavaScript must be enabled to view this email address)

The Rev. Roy Hansen, retired (pictured above in Tanzania), and his wife, Valerie Brown, have embarked on what they've called their "year of adventures."

In August, the couple sold their home in Corning and headed to St. Jean Pied de Port, France, where they began a 300-mile pilgrimage known as The Way of St. James or El Camino de Santiago. Legend holds that St. James' remains were carried by boat from Jerusalem to northern Spain where he was buried in what is now the city of Santiago de Compostela. According to the city's archives, 192,488 people made the pilgrimage in 2012.

In December, the couple began their work as missionaries through the General Board of Global Ministries in Tarime, Tanzania, working with Grassroots Ministry, which operates Angel House Orphanage and Angel Secondary School.

We caught up with the couple via email, and here's what they had to say:

The call to serve comes to many of us unexpectedly and leads us to places we cannot imagine ahead of time. This is what has happened to my wife, Valerie, and myself over the last year. We are currently living in Tarime, Tanzania, and have been here for one short month. We still look at each other sometimes and say, “We are in Africa!” “How did we get here?” “What does God ask of us here?”

Valerie and I have discussed for the past several years the desire to perform some short-term volunteer mission work. The problem was finding the time to do it. In addition, we had other yearnings that required a commitment of significant time such as a week-long bike ride and walking the Camino de Santiago pilgrimage in Spain. Even though I retired in July of 2011, Valerie was still employed as a social worker at the medical center. One day in November of that year, while walking the stairway in the hospital, Valerie had a revelation.

That evening we made our plans.

Valerie would take a self-appointed sabbatical; we would sell our house, take our bike ride in the summer, walk the Camino in the fall and then spend six months doing the mission work that we had dreamed about.

We wanted to sell the house to disencumber ourselves from property concerns as much as possible. Valerie resigned her position at the Arnot on May 10, 2012. The second week in July we peddled our bikes for about 275 miles through central Michigan after spending July Fourth with family.

When we returned, we proceeded to sell some of our furniture, give away much of it and store those items that were really important to us. We closed on the house on Aug. 10. Three weeks later, we were on a plane heading to France where we would start the centuries-old pilgrimage in St. Jean. Forty days later, after walking 300 miles along the Camino across northern Spain, we returned to the states to make final arrangements for our mission work.

All during the events noted above we were making our plans. We explored several options, but decided to work through the General Board of Global Ministries. While GBGM offers opportunities to volunteer throughout the world, our desire was to go to Africa. However, we needed to narrow (our decision to) where in Africa, as there are many places in need of volunteers. Volunteering in an orphanage seemed to fit us best. Working with Nancy Eubanks at GBGM we settled on Angel House Orphanage and Angel Secondary School in Tanzania. Our commitment is to stay here for six months.

Angel House became the dream of a small United Methodist congregation in New Carlisle, Ohio, after a member of their community returned from a trip to Tanzania. Seeing the extreme poverty and high number of orphans, he was touched with a desire to do something for these incredibly wonderful people. Thus Grassroots ministry, which oversees the work of Angel House Orphanage and Angel Secondary School, was born.

Grassroots is an appropriate name for this organization as the programs have grown and developed through the energy, excitement and commitment of both individuals in the states, who have donated generously, and the local community in Tanzania, who have worked tirelessly on the ground. The passion of everyone involved is palpable as they live out what all believe is God’s vision for this project and for their participation in its life.

Angel House opened in 2005 in a rented house in the town of Tarime. Since then, they acquired land to build an orphanage that will house 75 children. However, at this time they only have sponsors for about 50 children, and there is a waiting list.

Sponsorship of an orphan costs $130 per month; however, partial sponsorship is also possible. The children in the orphanage range from pre-school to those in secondary school. There are several reasons why children become orphans in Africa, including HIV/AIDS, malaria, war and violence or through abandonment.

Angel Secondary School was opened in response to a need for quality education. Often the children of Angel House would walk two hours into town to attend school only to find the teachers were absent. As the Grassroots Board of Directors wanted the children of Angel House to receive a good education they decided to raise the money to build their own secondary school, which opened in January 2011. The school also serves the local community and there are almost 300 students enrolled. The school’s reputation for providing a quality education is growing throughout the region, and students are coming from farther and farther away to attend as boarding students.

The school graduated its first class in December 2012, (school follows the calendar year in Tanzania) of which seven were from Angel House Orphanage. Though funding for the orphans (through sponsorship) comes from the U.S., both Angel House and Angel Secondary School are completely staffed by Tanzanians. This staff works closely with the Board of Directors to determine the needs of the children and to problem solve. It has been our observation that there is good communication and respect coming from both sides of the Atlantic.

Valerie and I arrived on Dec. 10 and we are still discovering how we can be most helpful to Angel House and Angel Secondary School. We have been spending most of our time getting to know the community and the beautiful children at Angel House, as well as the staff.

This in itself has been rewarding. We have been received with open arms by the children and the gracious adults who care for them. We also met with the seven former residents of Angel House who graduated last year. They are bright young adults with visions and dreams the same as our own children. It is just that it is harder to accomplish those dreams here. Valerie and I will be working with these young adults to hopefully help them on the road to accomplishing their goals. We will also have some administrative duties with the secondary school and perhaps do some tutoring with some of the students.

Since arriving we have been very impressed with the dedication of the staff at Angel House and Angel Secondary School, some of whom were orphaned themselves. Most of them could be holding down more lucrative positions elsewhere, but have a passion for the children supported by Grassroots ministry.

Through the excellent training provided by the GBGM before embarking on this journey we were aware that we would be experiencing culture shock and that there would be a period of adjustment to our new environs. While the children in the secondary school are taught in English, their first language is Swahili, and most of the locals do not speak English. Therefore, the most daunting task is learning to speak enough Swahili to be able to get around comfortably. It is our hope that we may employ one of the secondary school teachers to give us lessons.

While it is obvious that there are many ways to be in mission, we would encourage anyone considering volunteering to be of service to God’s children in another part of the world to contact GBGM (http://www.umcmission.org) for information, support and guidance.

Rev. Hansen served churches in the Upper New York Annual Conference, and was most recently director of pastoral care at the Arnot Ogden Medical Center in Elmira.