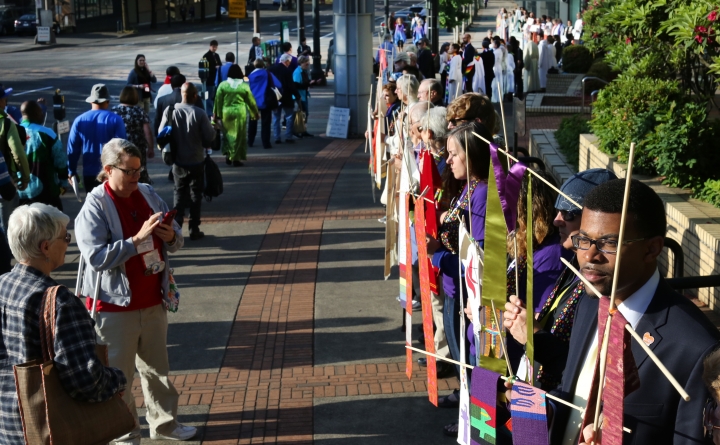 Love will keep us together, the Rev. Eli Sule Yakku of Central Nigeria said at the end of a long day filled with both kind and harsh words on the floor of the 2016 General Conference over lesbian, gay, bisexual, transgender and queer people and their role in The United Methodist Church.

During a particularly tense moment, a delegate rose and asked Bishop William T. McAlilly to step down as the presiding officer.

The decision to accept a recommendation from the Council of Bishops held all votes on human sexuality and referred all that legislation and the entire subject to a yet-to-be named special commission that will examine “every paragraph in our Book of Discipline regarding human sexuality.”

The decision was met with joy and trepidation.

“I am emotionally spent after a roller-coaster session of General Conference today, but am grateful that grace prevailed,” said the Rev. Frank Schaefer, pastor of Isla Vista Student Ministry in Santa Barbara, California. Schaefer faced a church trial in 2013 for officiating at his son’s same-sex wedding.

Schaefer sees the decision as a victory for the LGBTQ cause.

“It's a small step in the right direction that gives me hope and strength. I hope that our bishops will take their mandate very seriously and will be able to lead us toward reconciliation and unity,” he said.

“The bishops’ proposal is a small step forward after 40 years of nothing but backwards movement,” said Dorothee Benz, an advocate for LGBTQ rights and a lay delegate from New York.

“It does nothing to undo the systemic discrimination against LGBTQ people in The United Methodist Church, but tabling anti-queer legislation before this General Conference prevents further harm against us. That is a good thing, but the injustice remains,” she said.

“We’re grateful to the Council of Bishops for making a recommendation to the body,” Frisbie wrote. “While many of us believe that this should have happened decades ago, we know that it took guts to do it yesterday.”

Matt Berryman, director of Reconciling Ministries Network, said the action “represents a significant institutional shift in the direction of inclusion and equality.

“It is just a beginning, but it signals hope to an end of church trials, to celebrating all marriages, to accepting the gifts of our LGBTQ candidates for ministry, clergy and lay employees,” he said.

Berryman called on the Council of Bishops to act quwickly and lead as promised.

The Rev. Abel Lamido, Southern Nigeria, said on the surface, the proposal looks good, “but I personally don’t know what is under it.”

“The practice of homosexuality is something that is not biblical. We need to stay on the sound doctrine of the Bible. God will lead us where he wants us to go,” he said.

Good News, an evangelical advocacy group, warned the proposal has potential but is also “fraught with peril.”

“For the second time in as many General Conferences, the body has decided not to decide on reaffirming our church's teaching on marriage and sexuality. Instead, the General Conference has authorized the Council of Bishops to create a commission to address the divisions within the church and to propose a way forward,” a Good News statement said.

Others expressed concerns about protections.

“This might be the best option at this time, but I want to see protections for LGBTQ clergy and allies doing ministry with LGBTQ persons. A moratorium on charges and trials would be a positive provision as the church's commission studies the Book of Discipline's conflicting positions on human sexuality,” said the Rev. Israel Alvaran, a Filipino clergyman who is the Western regional organizer of Reconciling Ministries.

Darlene Marquez-Caramanzana, a reserve delegate from the Philippines Conference, said it was “affirming to hear the bishops speak and honestly accept that the current Book of Discipline contains words that are contradictory, unnecessarily hurtful and inadequate for a variety of contexts.

“With this, I hope we can move forward in trying to rectify the facts that we as a church had been part of exclusion and had not been an affirming faith community to LGBTQ. We have put them in the margins while these very people have faithfully offered their gifts and graces for the various ministries of the church.”

Some delegates rose to speak for accepting the bishop’s proposal but still wanted the 2016 General Conference to deal with all the legislation before the church’s top lawmaking assembly.

The Rev. Chappell Temple, a delegate from Texas, wrote a blog about his frustration over the decision.

“The recommendation also means that for the second time in two conferences, we will have effectively set aside and silenced the voices of numerous individuals who in good faith researched and wrote their petitions, argued them before their church or conference to get them approved, and then dutifully sent them in according to the timetable and instructions provided, only to see them tossed away without so much as the courtesy of a vote, or in some cases, even a hearing before a subcommittee,” he wrote.

The Rev. Adam Hamilton, a clergy delegate from the Great Plains Conference, made a motion to adopt what the bishops proposed with clearly defined next steps that included a special General Conference to deal with sexuality issues. His motion failed.

When that happened, he said he felt a “sense of grief” at the thought of the petitions that would have been painful to LGBTQ people could have been brought to the floor, debated and probably approved.

“Once again, the majority would have told a significant minority in our church, ‘We don’t really care what you think.’ And it was going to be painful.”

“The United Methodist Church is a broad tent and I think the edges, the far left and the far right, might decide we just can’t do this. But I think a large number of us can say we can live together. We love who we are as United Methodists,” Hamilton said.