Perspectives: Day in the Life

A Day in the Life of: Mary Dalglish

On any ordinary workday in the office, the first thing most people do is check the hundreds of emails that piled up over the last 15 hours of their absence. That's typical. The first thing I did today was put on a hard hat. Now, I know what you're thinking. "Mary, that tiny little camera is not going to fall on your head, nor would it give you the slightest concussion if it did." But I'm not worried about cameras falling from the sky. I'm worried about construction debris as walls are torn down and ceilings are repaired. 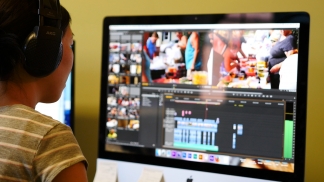 Today, I'm recording video and taking photos of the progress at the new Conference Center on Henry Clay Blvd. It's something I do once a week to keep everyone informed and right now, demolition is underway. I had a hard time trying to figure out where I was as I walked through the front doors. At first glance, I thought I walked into the wrong building due to the lack of coffee I had earlier. No, I was in the right place but something was missing. Walls that were once familiar and acted as navigational guides were gone. There was nothing but wide open space and plenty of light. After gathering more photos and videos than one would possibly need, I headed back to the office.

The first thing I always do after returning from a shoot is import my video onto a hard drive for editing. I can't tell you how important this step is. Not only am I creating a back up, but I'm also able to review the video and take notes while it's still fresh in my mind. It doesn't usually take long to do, but once it was done, then I checked my email. Only 27 unread emails this morning!

Sitting down to edit a video usually takes a lot of patience. Normally I would start editing a video shortly after returning from the shoot, but since this particular video is in the making for the next few months or so, I picked up where I left off on an edit from the day before.  Some of the more involving videos may take up to a few days to complete depending on how long it takes for those creative juices to start flowing. Today, the creativity started pouring out faster than usual. One of the biggest challenges when telling stories through videos is making sure you have enough visual content to keep your viewer engaged. There are many times when someone on camera is describing an experience they recently had, but have no visual components to help support it. This is just such the case now. How do I show something that happened without having video or photos of it? That’s when the creativity really starts to kick in. In this case, I have a man describing his experiences in solitary confinement and I have no idea how to visually support something like that. Don't worry, I won't spoil it for you, but let's just say that animations and graphics will do wonders!

Normally, a day of editing would end with the export of a semi-final video which is then sent to others just to get more eyes on it. Then the final version is published for all to see and enjoy. In this case, the edits will take several days and a lot of inventiveness. So, a simple "file and save" will do just fine here.

I know it seems silly, but the hardest part of my day is packing up to go home at the end of the workday. "What am I forgetting? What lose ends did I not tie up? Do I have a shoot tomorrow morning? Will I need the camera tonight?" This is the time of day when I really tend to over-think everything.  But once I get into my car and drive away, I relax by telling myself," there's always tomorrow! "