October 25, 2019 / By Shannon Hodson / .(JavaScript must be enabled to view this email address)

Advent is just over a month away. Have you planned your Advent sermon series? Is it the same year after year? If so, the Rev. Grace Imathiu wants to change that. She was the featured speaker at the 2019 Upper New York Bishop’s Retreat held Oct. 22-24 at the RIT Inn in Rochester, NY. 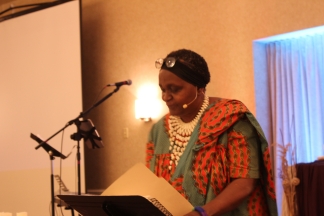 Dean of the UNY Cabinet, the Rev. Nola Anderson introduced Rev. Imathiu as “a citizen of the world…the world is her parish.” A brief look at Rev. Imathiu’s experience showcases the truth in that introduction—currently serving as the Senior Pastor at the First United Methodist Church in Evanston, IL, Rev. Imathiu has also served as Lead Pastor at UMCs in both Brown Deer, WI and Green Bay, WI. Additionally, she served churches in Kenya as a church planter, was a superintendent minister overseeing 68 rural churches in Nkubu, and an urban minister to an ecumenical congregation in Nairobi with strong outreach to the neighboring slums of Kawangware.

Rev. Imathihu prefaced the Advent story by reminding the audience that the setting was one of chaos, much like today’s society. Shepards were told to “go back where they came from...back to where their ancestors came from.”

“Living in end times is a human condition,” Rev. Imathiu continued. She listed the following as apocalyptic moments that people in the pews could relate to: 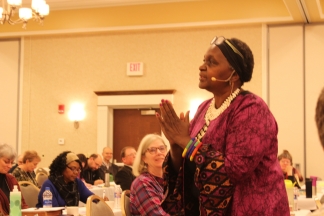 Rev. Imathiu showed a video of the awareness test from Daniel Simons and Christopher Chabris. The video shows people in white t-shirts and people in black t-shirts tossing a basketball back and forth. The audience had to count how many times the basketball was tossed back and forth between the players in the white t-shirts. What people don’t notice as they are fixated on counting the passes, is that a gorilla appears on the screen.

Rev. Imiathu said, “If you want to see the gorilla, God, you have to go off the grid.”

Referring to the first sermon of Advent, Rev. Imathiu said, “The world as you know it, you have to let it go if you are going to prepare for Christ.”

Traditionally, the first candle of Advent, symbolizes hope. Rev. Imathiu urges pastors to keep in mind the apocalyptic and encourage their congregation to “Let go and Let God.”

On the second Sunday of Advent, where the candle lit traditionally symbolizes the need to repent, Rev. Imiathu pointed out that this is where people should start to make a 180-degree turn, to consider how they can change their life.

Rev. Imathiu retold the story of John the Baptist urging people to repent. She suggests that after people, “let go,” it may be a good day for the congregation to “get dunked” or renew their baptismal vows.

For the third Sunday of Advent, the theme is to see. Rev. Imathiu asked the audience to consider “the ‘only God’ things that are evidence of his kingdom.” 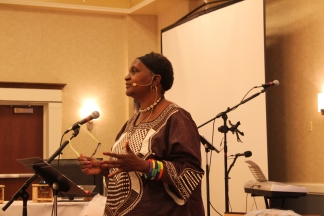 She said that while incarcerated John the Baptist did an ‘only God’ thing. She referenced lyrics from Bob Marley’s Redemption song, “Emancipate yourself from mental slavery. None but ourselves can free our minds.” That is what John did.

Rev. Imathiu pointed to many ‘God things’ evident through churches; she emphasized churches who welcome and accept those who are oppressed.

Rev. Imathiu told pastors that for this Advent, they can be effective by shifting their message the way she has outlined, but that everything else can remain consistent with previous years.

She said somewhat sarcastically, “I know you are excited about preaching already.” But then she reminded everyone that “The hymns are going to support the message, so you don’t have to do all of it in one sermon; you have prayers; you have testimonials; you have welcome; and you also have the visuals around you for support as you [take] the journey towards Bethlehem.”