From Sept. 21-Oct. 5, 2019, eight people from Upper New York (UNY) joined a crew of 22 volunteers from throughout the Northeastern Jurisdiction and beyond on a mission trip to St. Croix. In all our Team 32 worked on six homes putting on finishing touches, starting new projects, and significant work on whole roofs. We worked in the Frederiksted area on homes for permanent residents who are seniors, or disabled, or dealing with significant health issues. Walt Mathias of UNY was the leader of this mission trip.

St. Croix has experienced a 30-year economic decline due to the primary employer, a refinery, closing. Now that the refinery is being brought back on line, there is hope for recovery, but resources both personal and municipal remain thin.

As often happens with slow disaster recoveries like this one in Puerto Rico and the Virgin Islands, people become deeply discouraged, feeling abandoned and in some cases preyed upon by opportunistic or unqualified repair people. The teams learn to expect tentative acceptance by homeowners wary of new faces promising repairs. As the days wear on, that acceptance turns to joy as the work gets done, and deep gratitude as relationships blossom.

Linette Carlson of the New Mexico Annual Conference extended her stay on this mission trip and recounted how one struggling couple has been touched by the two teams this month (our team was Team 32 and the Team Linette joined was Team 33). The names have been changed in Linette’s account for the purpose of confidentiality. 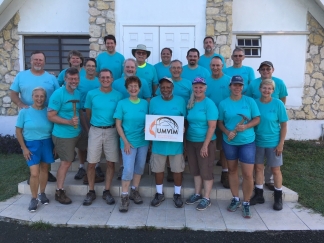 Linette said, “A number of us worked at the “V” house or John and Maria’s house. The good news is that team 33 has been working all last week and will be there all next week and progress is good. Tarps and old purlins removed, Existing T 1-11 is screwed down, new T 1-11 has been installed where needed, Facia is up, felt is down and we will finish the purlins tomorrow am. Once inspection is done... metal goes up! Yeah. New doors (3) are on site to install. A wall will be built in the large front opening and will have one of the new doors and window. New windows will be installed in the future and LLS is working on a grant to hire an electrician to completely reside the house. And, yes, there is a plan to power wash the entire inside of the house at some point.

Maria and John were sent to St. Thomas on Tuesday so Maria could have a biopsy on Wednesday (those who worked there know she was in pain and the left side of her face and jaw were swollen). She gave me permission to reach out to my church community for prayer and I prayed with her before she left. She said she believes in prayer, had tears in her eyes, and gave me a big bear hug.

They flew back on Thursday and later that day received the call that she has cancer. I don’t know what type or what stage. She will be flown off the island for chemo and surgery. Obviously shaken and scared, the entire team prayed with both Maria and John…

On Friday afternoon, John and Maria came by the work site and were so amazed, grateful and overwhelmed with the progress to the point of being speechless. Maria gave permission for prayers requests to be sent out to all of our churches/pray warriors!”

Having worked at the house at the beginning, and at dozens of other sites over the years, I can say that this couple was the most affected and discouraged that I have ever seen. The condition of the house was utterly appalling. It is compelling to see how a house (and the lives of those who lived there) can be transformed by the work of United Methodist Volunteers in Mission.

Walt spoke of a moving experience he had on a house the team worked on; he said, “I was very much moved by the response of a family to their 'last nail' ceremony. The resident had lost all hope and was physically ill over the fact that she did not think she would live to see her home repaired.  It is now repaired, and she now has that 'life is good' feeling back.”