Miko Peled, Israeli Jewish peace activist and advocate for Palestinian justice, spoke about the need for people of good will to work for freedom and justice for the Palestinian people. As has been said by others, he said that to know of injustice and to remain silent is to be complicit. 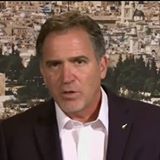 Growing up in an Israeli Jewish home, with a father who served as an Israeli military officer and eventually became an Israeli General, Miko was very familiar with the Israeli Jewish narrative. However, he often heard another recurring narrative from his mother, who frequently related this story: In the late 1940s, as the Palestinians had left the area, she, a 22-year- old fiancé of an Israeli army officer, was offered a beautiful Palestinian home in what had been a fairly well-off Palestinian neighborhood. It was a lovely home in which to begin married life.  She refused. She said she could not take another woman's home. This story, oft-repeated in the family, did not match the other Israeli narrative Miko heard, which always portrayed Israel as taking "the moral high ground".  Nor did his father's growing interest in and concern for the Palestinians. Miko realized that the predominant narrative in his Israeli culture was untrue.

When Miko's niece, Smadar, was killed in a suicide bomb attack, Miko decided it was enough; it was time to take action to try to resolve this senseless conflict. He began pursuing ways to promote freedom and justice—to bring a just peace as the resolution to what he says is neither a war nor a conflict, really, but an ongoing resistance by the Palestinians against the "racist laws" (his words) and policies of Israel.

Holding out hope, Miko enjoined all his hearers to join in being part of the solution and not part of the problem. boycott, divestment, and sanctions was mentioned as a non-violent tool for change, referencing its effectiveness against South African apartheid.

Contributions for "Luci-Lites" for children in Gaza were also collected, to be sent to the organization "Rebuilding Alliance". Miko commented that these lights are needed because of oppressive Israeli policies depriving Gaza of adequate electricity; they would not only help children with their studies, but also, would help doctors in operating rooms and many other essentials. This is a project any local church can do.

The 70+ people who heard Miko on September 16th, plus those who attended his presentations at Geneseo and Rochester earlier in the week, experienced a true peacemaker.

For further information, read Miko Peled's book, The General's Son:  Journey of an Israeli in Palestine, or go to www.mikopeled.com