September 28, 2016 / By Shannon Hodson / .(JavaScript must be enabled to view this email address)

The structural inequality of the impoverished that John Wesley spoke about in the 18th century still persists today. In his time, for example, too much grain had been used for distilling liquor, leaving a shortage of grain to make bread, which drove up the price and especially hurt the poor. From Wesley’s point of view, everyone who was able to work was indeed working, yet people were still going hungry.

To this day, many people face income inequality and hunger due to reasons beyond their control. At the Faith for a Fair New York Conference that took place Sept. 25-27 at the Liverpool First United Methodist Church, UNY Methodists and several individuals from other denominations and religions were able to learn details about these statewide structural inequalities and engage in discussion on ways in which these problems can be addressed. The event was presented by the Labor-Religion Coalition and partially funded by the UNY Social Holiness Team. 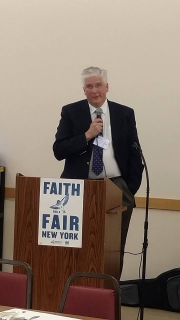 On September 26, the morning session, entitled “Poverty and Inequality in New York State-Structural Roots and Impacts on Rural and Urban Communities,” began with an introduction from Rev. Peter Cook, who is the Executive Director of the New York State Council of Churches. He said, “I was a pastor for about 26 years. It’s one thing to meet with a parishioner in your office who’s in tears describing that she can’t pay the rent and doesn’t have enough money for food and you scramble to find 20 or 30  or 40 dollars, or money from the discretionary fund, but we all know how inadequate one feels when responding to these sort of requests and sooner or later in your pastoral care, you have to ask why is it that housing is so unaffordable, that people don’t have enough money to buy the most basic food for their kids; you have to begin asking those structural inequality questions. There’s a lot of inertia in local congregations to not to deal with those kinds of things or to turn it into some small amount of charity, but really we need to do more!”

Rev, Cook continued, “I think of this and imagine the early United Methodists turning in their grave, reminding us that we are here to reform the world, to abolish slavery, to lift up workers who have been oppressed.”

Rev. Cook informed people that the panel was going to talk about the overall picture of economic inequality in the state and how congregations can become part of movements to reform structural inequality. The four panelists were: the Executive Director of the Fiscal Policy Institute, Ron Deutsch; the principal of Wilkes Advocacy Group and Associate Pastor at the Greater Allen  A.M.E. Cathedral of New York (GAC), Rev. Andrew Wilkes; the President and CEO of the Food Bank of the Southern Tier, Natasha Thompson; and the Executive Director of the Coalition of Economic Justice, the Rev. Kirk Laubenstein.

Ron Deutsch started by revealing to the attendees that the wealthiest 1 percent of New Yorkers make 30 percent of the income. He said, “The national average is 21 percent, so New York is definitely 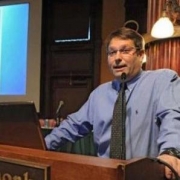 skewed.” Ron showed startling statistics like the fact that 65.2% of African Americans are living in poverty—that is the highest percentage in the country! Ron explained how education needs to be addressed—that child poverty rates mirror graduation rates—both are around 50% in many Upstate cities. He explained that policies need to be created to help these people climb the ladder. Too much is being spent on what Ron called “bogus” economic development projects and not enough is being spent on providing opportunities for people living in poverty.

Rev. Andrew Wilkes expressed the theology of inequality. He described three ways that churches think about poverty and inequality. He said, “The first one is lottery—that God sprinkles around wealth, talent, and opportunity. So the answer is philanthropy. The sec 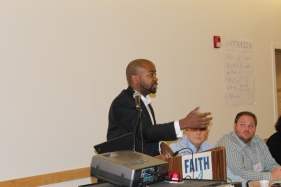 ond way is therapy. This is having an excessively inward/interior religion so instead of dealing with the question of inequality and poverty, we just check out altogether. It’s a religion of inspiration; it’s religion as a soul cycle. It’s religion to make you feel good. The third theology is the option of transformation, which can be individual or structural. Individual is about creating more success stories.”

Natasha Thompson spoke of the poverty she witnesses in the predominantly rural Southern Tier.  She explained how the Southern Tier Food Bank distributes food to 165 community organizations, most of which are faith-based. She asked the attendees how many have volunteered at a food pantry or meal site. Nearly every person raised their hand. Then, Natasha asked the attendees, “How many of you would consider yourselves a regular volunteer?” Only three people raised their hands. 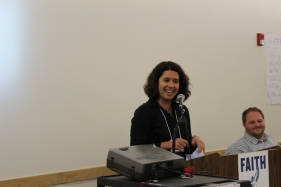 Natasha described a pattern she notices at churches. She said, “There are people who do the charity work; they stock the pantries; God bless them. Then, you have the social justice people and these two groups don’t always hang out together. You don’t find a lot of social justice people working at the food pantries and to me that is an opportunity because these people (social justice people) are context experts and they need to be engaged.”

Natasha then described a recent study that the Food Bank was involved with that interviewed food pantry workers and asked them why hunger exits and few people knew. She said, “Poverty is the underlying issue. In the Southern Tier, 72,000 people are living below the Federal Poverty Level; 41,000 children are eligible for free or reduced lunches at school, which is over half of the school-aged population.

The biggest issues in Upstate New York are the decline in manufacturing jobs, transportation (if you don’t have a vehicle, you can’t get to places of employment), and housing. I live in Tompkins County for example and the majority of the people who work in my country travel from other counties and if they don’t have transportation, they can’t get to work and they can’t live in my county because they can’t afford it. So the goal for us service providers is that we need to think more global.

We need to form more partnerships. People are more than willing to talk about hunger, but they don’t peel the onion back and talk about the root causes, which is poverty, structural inequality, and racism—all topics that scare people.

If there is one thing I would like people to take away from this talk, it’s to go back to your community of faith and infiltrate the food program. We can provide Hunger Education, which is necessary. We go out into schools, workplaces, Chamber groups and blow their minds because they never thought about why hunger exists. So we want to create minions and start seeping into people’s consciousness. Once people understand these underlying issues, it’s almost like they have no choice but to join the movement.” 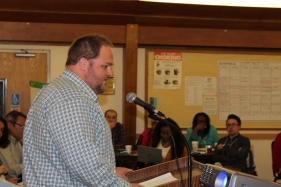 The last speaker was Rev. Kirk Laubenstein. He compared the work that his organization does with low-wage workers as being yeast. He said, “I see the work we do as being that little yeast that can make the bread rise and taste so delicious. This room gives me hope. This room can be yeast in a world that really needs it.”

Two United Methodists of Upper New York attending the conference offered their perspectives on what the UNY Conference can do to help create social change on a state-level.

Carmen Vianese, who is very involved with United Methodist Women, explained the importance for attendees to go back to their churches and not just tell people what they heard, but also build small groups and create relationships with others to try to tackle these large issues. She said, “As United Methodists, it’s about small groups; it’s about relationships; it’s about accountability, and if we don’t share the stories, we don’t move forward. We get stuck in our little silos.”

Carmen encouraged UNY Methodists to come to interfaith events like this to learn about structural injustices. She said, “It’s gatherings like this that remind us, ‘We can do this!’ The task can be so overwhelming, but when you sit back and you see all the people around the room representing a denomination or a group of people, it gives us hope. For example, when I went to national events representing United Methodist Women, that’s 800,000 people of the ones we know of! You add the group I represent and the others and you get a very large number of people fighting for social justice.”

Rev. Marti Swords-Horrell of Christ Church UMC could not believe how much she learned just from one panel. She referenced the foot of justice and foot of mercy, explaining that far too often, the UNY Methodists use only the foot of mercy. She said “I feel like as white, middle-class people, which is 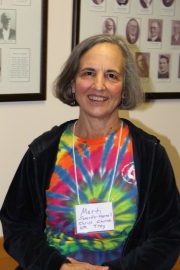 Rev. Swords-Horrell talked about the fact that the big UNY Conference (compared to the four smaller conferences that existed prior to 2010) appealed to many because of the impact that the Conference may be able to have on state politics as a larger body. She said, “Overall, we need to become more educated about state programs like Medicaid and food programs.  We need to work more with the New York Annual Conference. That’s what we do with the New York State Council of Churches; I am one of the UNY representatives. We look at state-wide social justice issues.”

Economic injustices in New York State are widespread; they’re present in every District in the UNY Conference; they’re evident in rural areas and urban areas. It’s a huge issue to try to tackle, but conferences like Faith for a Fair New York take place to inspire faith organizations into action. As for the UNY Conference, Rev. Swords-Horrell gave helpful advice on how to begin addressing the issue of economic injustice. She said, “We need to build relationships with people who are facing these economic hardships. We need to take more risks.”  She recommends the organizing tool of one-on-ones to truly get to know people who are facing economic hardships, to understand their needs. “It’s about quieting our mouths and listening….really getting to know what’s going on.”