Will Green raised funds that built a well in Nicaragua.

August 10, 2016 / By Shannon Hodson / .(JavaScript must be enabled to view this email address)

Eleven-year old Will Green is responsible for providing clean water to a community in Nicaragua. His story is an inspiring one. 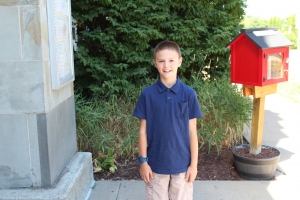 It all began two years ago when Will was working on his required summer inquiry project for school. He decided to focus on water, and he learned about that many communities do not have access to clean water. He felt God was calling on him to do something about this.

At the same time Will’s church, Hilton UMC, was focusing on a mission project for Vacation Bible School. This is something they do each summer, and Will thought what better idea than to raise money to build a well for a community that needs water.

Will said, “First, I thought that Africa would be a good place to build a well. Many people there do not have access to water. But then it came to my attention through a church member that some people in Nicaragua do not have clean water.” That summer, the fundraising project for Hilton’s VBS was to raise money for a well to be built in a Nicaragua community. The VBS raised $400, but that was only the beginning.   If Hilton UMC raised $1,000 toward the well, El Porvenir, would match their funds, for a total of $2,000, which is what is needed for a well.  Hilton UMC gave the money through United Methodist Committee on Relief because El Porvenir is an UMCOR Advanced Special.

Will was determined to raise the $1,000 by soliciting donations from the church members. The pastor of the church, Rev. Jennifer Green, Will’s mother, said “I told Will that he has to be patient. I warned him that it may take many months to raise another $600 toward this project. I was surprised when we raised the $1,000 needed in three weeks.” Will was quick to interject when he said, “We actually raised more than $1,000.” His mother responded, “You are right; we raised a little bit more than $1,000.”

With the money in hand, a well was to be built in a community three hours from Project Chacocente, which is where the Genesee Valley goes for its mission project every February. Project Chacocente was founded by Cheryl Avery in 2004. With the help of North American Christian youth, the plight of ten families living in a city dump in Managua changed forever. The families moved from their homes atop the trash heap to the fresh air and fertile land of rural Masaya, the home-base of Project Chacocente. Will described this project as a place that has schools for the children to learn and vocations taught to their parents so that they may earn a living.

A family friend of the Greens and former member of Hilton UMC, Ashley Sullivan, was so moved by Project Chacocente when she went on a mission trip as a teenager that she now lives in Nicaragua. She works for the 4 Walls Project, an organization that builds safe, sturdy houses in El Sauce, Nicaragua. This past winter, with Ashley’s help, Will was able to go see the well that was built because of the fundraiser he initiated.

Will and his mother joined the Genesee Valley District on their annual mission trip to Project Chacocente in February. After 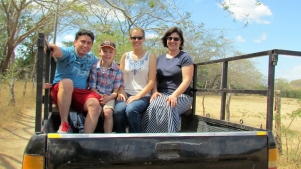 they completed their mission work, Ashley helped arrange for a driver and an interpreter to drive Will and Rev. Jennifer  20 minutes away to the countryside outside of     El Sauce so that Will could see the well. They rode in the back of a truck driven by a young teenage boy. Their interpreter was, Chiky, a resident of Project Chacocente who the Greens learned recently passed away.

When Will first saw the well, he became very quiet; he was overwhelmed. 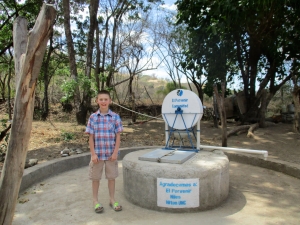 Imprinted on the well is “Hilton UMC.” This well serves 25 people who never had clean water. Will said, “The town elder told us how the well was built. Workers had to dig down 25 feet by hand to where water the water was.” Rev. Jennifer added, “They dug the hole and searched for the water reservoir in the dry season so that they would know that water would be available even if they were faced with a drought.” The town elder also informed them that before the well was built, they used to have to walk six miles to get clean water and six miles back with a heavy bucket of water. 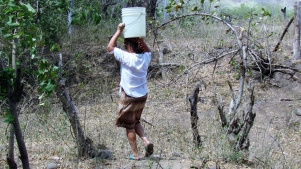 Will’s response to God’s call to help people in need has left an impression, not only in his church, but also in the community at large. He recently received the Rochester Police Department’s “Do the Right Thing” award. This award recognizes youth in Monroe County for positive behavior. 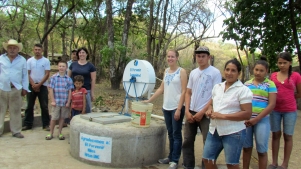 Will’s story is proof that no matter who you are, through God, all things are possible. Even a young boy can be the source of vital world-wide ministry. So the next time you don’t think your church has the resources to do something big for God, remember a nine-year-old boy built a well in Nicaragua that was life changing to the people it serves.