From April 7 to April 13, a team from Lansing UMC traveled to Danville, VA for Hurricane Recovery. In September 2018, the Dan River crested at 22’, and again in October crested a record 30’. Team leader Steve Alexander was in contact with Disaster Coordinators from North Carolina, who re 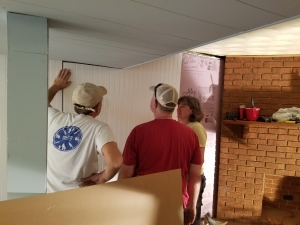 ferred Steve to Pastor Bob Pihlcrantz, the VA UMC Disaster Response Coordinator. He said that the Danville area was in need. Pastor Lisa Nordan is the Danville District Disaster Relief Coordinator. After the storm, she had begun, with local help, to muck out and remove damaged material. Once Pastor Lisa applied for and received grant money, she called for teams to help with recovery.

The team split into two four-person teams to work on two sites. One needed a ceiling installed, trim work, and light fixtures. The other needed paneling installed and painting. Morning arrival on site at 8:30 a.m. saw one team prepping the cement walls, the other to measure for trim. Lunch brought the team together again to share the meal on site. Break for the day was at about 5 p.m. when we returned to the church, cleaned up, and took turns to prepare dinner. Devotional time followed dinner and then review of work accomplished and plans for the next day with supply needs. 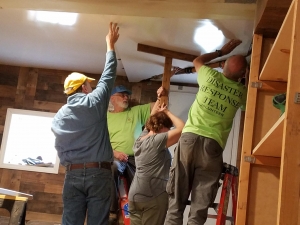 By the end of the week, we had the ceiling installed, the light fixtures in, the trim applied, and doors installed. The second site had paneling and trim installed, walls painted, new vent covers, doors installed, and an old dryer vent sealed, and as a surprise bonus (for owners) a defunct access panel turned to a shadow box.

The families were still living in the homes, receiving the teams with grace and love, even after living for so long with the damage, even when they are sick and have to go for evaluations, even when their privacy has been shattered, and when they are preparing to receive the next team. For while the family feels lost and the team hears the call to mission, it is God who is working. As one devotion quoted Psalm 46:10. “Be still and know that I am God.”