Editor's Note: This article originally appeared in the Summer 2020 issue of the Advocate, which focused on "Keeping Connected."

At the onset of the COVID-19 pandemic, almost every religious organization began to ask the same question: How can we help? We at First United Methodist Church of East Greenbush (FUMCEG) decided early on that a major target of our focus should be the elderly population, who would surely be among those most adversely affected in the days and months ahead. Fortunately, we were well positioned to do this, as our congregation already had established long-standing relationships with several area facilities where many of our senior citizens reside. At Rosewood Rehabilitation and Nursing, for example, we have been conducting services every month for the last 30 years; and a similar monthly program was instituted at Riverside Center for Rehabilitation and Nursing five years ago.

In 2018, Deb Samuel, who is the wife of our Pastor, Sundar Samuel, formed a weekly Bible study for church members living at Eddy Hawthorne Ridge senior living community. The program was well received and grew beyond church members. Participants soon began asking if we could provide a weekly worship service at that location as well, which we are pleased to have initiated two years ago. 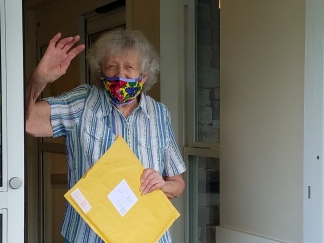 So, in March of this year when it became essential to further address the needs of our senior communities, recruits were quickly found and teams were put into place at once. Currently, we are engaged every single week in reaching out, both by telephone and through handwritten notes, to over 100 area seniors, many of them in the adult facilities mentioned above. Working independently from their own homes, our volunteers maintain contact with individuals who are otherwise feeling the burden of extreme isolation. Note cards are collected and delivered by mail to the nursing/rehab centers. At Hawthorne Ridge, church bulletins and other notices are sent directly to those who do not have access to e-mail.

In addition, thanks to some tech-savvy church members, we have been providing a livestream of our Sunday worship services through the FUMCEG Facebook group page. To our delight, many senior citizens have risen to the task of joining us via their computers, tablets, and smart phones.

The feedback we have received as a result of our various efforts has been especially heartwarming. Callers engaged in telephone communication reported that even if people didn’t have a particular need, they were just happy to have someone reach out to them. What’s more, they were anxious for word of how everyone else was faring, too. One person noted, “When I didn’t call on the usual day, people worried that I was sick.”

Frank Fortino, former activities director at Riverside, told us, “Thank you so much for the note cards. The residents here love them because they are receiving something in the mail, and it is exciting when it is a friendly card!”

Ethel Center, a centenarian who lives at Hawthorne Ridge, wrote to us about the special messages Pastor Sundar sends each week, calling them “both inspirational and enjoyable.”

At Rosewood, residents acknowledged their appreciation and also gave us some lovely pictures they had drawn.

Deb Samuel, who composes her own weekly message to accompany the one written by Pastor Sundar, observed, “When we first came to live among you, it seemed that there were so many different groups within the church operating along parallel lines. Now, hearing so much about the warmth and connections that phone calls, notes, and livestreaming of Sunday services are making, has allowed me to witness these lines crossing and intersecting, instead of simply running parallel. It is such a joy to see how God is using this time to draw us toward Him and each other.”

Indeed, if anything positive can be said to result from the novel coronavirus experience, it may just be that having to be separated from one another has brought us all closer together!