November 16, 2021 / By Shannon Hodson / .(JavaScript must be enabled to view this email address)

The Society of St. Andrew has been contributing potatoes to the Upper New York (UNY) Conference for many years (except for 2020 when COV 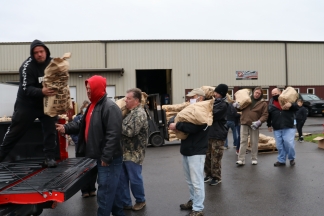 ID-19 posed safety concerns for such an operation). The Society of St. Andrew gleans produce left in fields after harvest season and then delivers the produce to churches. The churches distribute to area food pantries and organizations to help feed the hungry.

Each truckload of potatoes that came to UNY from Northern Maine contained eight-hundred-forty 50-lb. bags of potatoes. This year, potato drops took place in Clyde, Liverpool, Rochester, Endicott, and Albany. This was the first year that the Albany and Rochester areas had potato drops. This was made possible by splitting truck loads.

On Saturday, Oct. 23, the first truckload of potatoes was delivered to Rose UMC in the Finger Lakes District.

On Saturday Oct. 30, one-half a truckload of potatoes originally intended to arrive at the UNY Conference Center, dropped the potatoes at Pioneer Warehouse down the street from the Conference Center. Pioneer kindly lent their space so that volunteers could stay during heavy rain.

Later that day, the truck arrived at Wesley United Methodist Church in Rochester. The UNY Director of the potato drops, Dean Burdick, said “What a blessing that we were able to coordinate a drop for Rochester; there are so many people in the Rochester community who will benefit from this.”

The Rochester potato drop was held in memory of George Sanford, a United Methodist who died earlier this year.

Mike Mitchell, the site director of the Rochester potato drop said, “George was not scared to talk about Jesus anywhere, time, or place.”

On Nov. 6, Endicott UMC in the Binghamton District split a truckload of potatoes within the Albany District. This was the first time that a potato 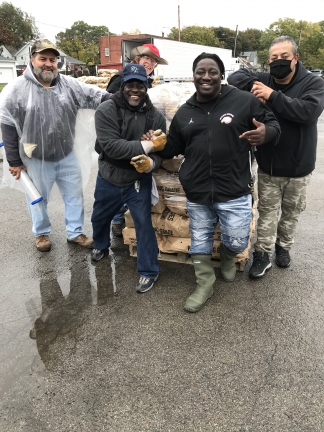 The potato drops that arrived in UNY over the past month were distributed to hundreds of food pantries and community organizations. A lot of food pantries are including these potatoes in Thanksgiving baskets for families throughout the community.

Buddy Heit, the site director for the potato drop at Rose UMC, said, “The Society of Saint Andrews says two ounces is a serving, which means each total truck had 336,000 servings.”

The potato gleaners and packagers, the truck driver, the site directors, the dozens of individuals loading potatoes or praying with the drivers picking up the potatoes, and many of the food pantry workers are all volunteers. The Society of St. Andrew potato drops showcase how many hungry souls can be fed by thousands of individuals being the hands and feet of Jesus.