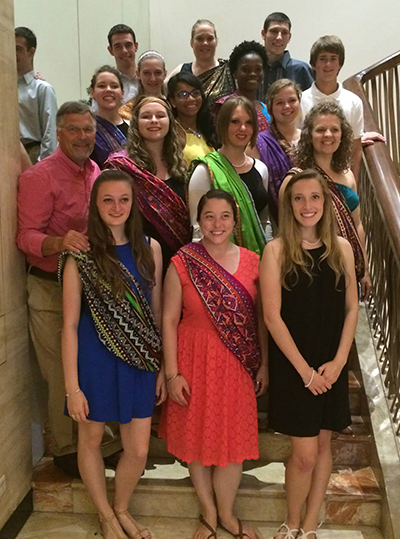 July 31, 2014 / By UNY Communications / .(JavaScript must be enabled to view this email address)

The 2014 Global Young People's Convocation & Legislative Assembly in the Philippines was attended by more than 300 young people and observers. Among other business, the young people urged leaders of the denomination to “seek solutions that promote our global unity” and not be divided by issues such as homosexuality, adopting a unity statement the night before ending its quadrennial gathering on July 20, 2014. Click here to read the statement.

Being a part of the GYPCLA and traveling to the Philippines, has taught me so much. One person told us that the Filipinos are known as the smiling people. They smile because even though they know that they are poor in this life, they know that they will be rich in the afterlife. I love that. I have made lifelong friends from all over the world. Words can’t even begin to describe all that this trip has taught me and opened my eyes to. I am so incredibly blessed to have had this opportunity.
Riley O’Flynn, Youth Voting Delegate, Upper New York

I find it difficult to put into words the experience I had at GYPCLA. Love was shared. Words were spoken. Hearts were open. There was breaking down and building up of a community of young people. But even in the hard times of the event, my love for the United Methodist Church never wavered. To see, hear, and experience young people gathered together from 34 countries, with diverse backgrounds and different cultures, all in the name of Christ, was truly moving.
Ashley Riddell, Young Adult Delegate, Upper New York

As I look back at this Global Gathering, I am impressed again as I see the youth and young people of the world take on the important issues that face the whole church.  At times they had to agree to disagree but were able to still be brothers and sisters in Christ. Many friendships were formed and old ones renewed.  We worship, sang, and broke bread together.  Through the Global Gathering we see that the church does have a future and these youth are also the church of today.
Thomas Schmidt, Adult Youth Worker Voting Delegate, Upper New York

At this diverse global gathering I learned that unity can come from division, and that differences of opinion and perspective, while they will often bring about dissonance, don't have to end on sour notes. After a destructive typhoon there was peace and overwhelming hospitality. After destructive debate there was dancing and celebration. For we all have the same Spirit within us – United Methodist young people from 34 countries and our smiling hosts who put their guests above themselves. We all share in the Spirit of Christ.
Rebekah Clapp, Young Adult Voting Delegate, Western Pennsylvania

At the 2014 Global Young People's Convocation & Legislative Assembly, our primary goal was to make our opinions heard about the most pressing issues within the global United Methodist Church at the present time. We accomplished that and more. We survived typhoon Glenda, collected over $1,500 for rebuilding the CCT Retreat Center, packed food to feed 600+ families impacted by the typhoon, commissioned forty two global mission fellows, discussed legislation, presented a profound statement of unity, and had fun too. I feel very blessed to have had the opportunity to be a part of such an important event within the United Methodist Church and hope to have similar opportunities to do so in the future.
Jay Codner, Young Adult Non-Voting Delegate, Baltimore-Washington

During the last Worship of the convocation we sang "Oceans (Where my feet may fail)" by Hillsong United. Their lyrics state "Take me deeper than my feet could ever wander, And my faith will be made stronger, In the presence of my Savior." These Lyrics spoke to me. The theme of the convocation was "Crossroads." This was my first trip abroad, and it was an amazing experience. Even though the plane ride was long, and we arrived during a Typhoon this was an experience I'll never forget. This global event brought people from all over the World together, God has guided me by allowing me to have the resources and the faith to witness greatness. Ann Jacob and Lenora Thompson, (my aunt) last August talked to me about Global Young Peoples convocation and legislative assembly taking place in Tagyatay, Philippines. Without them or God, I would have never met the incredibly brilliant people that have changed my life. Through surviving the Typhoon and traveling over 15,000 miles from home, God has taken me deeper than my feet could ever wander, and made my faith stronger, because we were in his presence.
Ashley Thompson, Youth Voting Delegate, Eastern Pennsylvania

My trip to the Philippines was truly a moving experience. The part of the trip that had the most impact on me is the way that the Filipino people were so hospitable and caring even after all of the destruction of the typhoon. A Filipino told us that the Filipinos are the smiling people because they realize that even though they may be poor in this life, they know that they will be rich in the afterlife. I learned a lot from the Filipino people and I certainly feel blessed to have experienced some of their culture.
Lauren Lomas, Youth Adult Voting Delegate, Eastern Pennsylvania

Attending the GYPCLA was an eye opening event. Having the opportunity to see how different people from different countries with different languages, ideas and opinions can still come together to work towards the same goals was an experience I will never forget.
Carleen Long, Youth Non-Voting Delegate, Western Pennsylvania

Read and see more on the Global Convocation