Making progress because of Jesus

Billy and his mom can’t live together. Billy is rough around the edges and knows how to move on when the staying is too much. Billy loves his mom; she lives in St. Louis and gets a visit from Billy every few years. She gave birth to Billy at age 15 and was dealing with her own adolescent issues. Billy nearly died as a toddler, being poiso 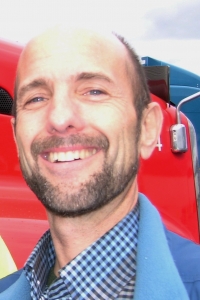 ned with hair dye. Fortunately, there was a hospital across the street; his stomach was pumped and his life saved.

Billy was raised as an only child and recalls a memory of attending his first music concert with his Mom(the Beatles in 1966 at the St. Louis ball field), but most of his early years were with Great Grandma, who lived off contrived but profitable legal settlements with large St. Louis area corporations. Mom was out sowing her wild oats, and eventually brought home the stepdad from hades. Billy was surrounded by a dysfunctional family and a social circle of gangsters, mobsters, drinkers, and drug users. He became a user himself, and joined the family business of lawlessness, ending up in jail for a total of 27 years (that doesn’t include 3 years in juvenile). His offenses were armed robbery and auto theft. There was a brief window in his 20s when he lived in an apartment and worked for a paycheck, but it was short lived. He eventually ended up on the streets of Sunset Strip (Hollywood) and rubbed shoulders with the rich and famous (June Pointer, Jim Carrey, Andy Gibb, etc.) back in the 80s when cocaine use was part of the status. He was a hardened man with a hard heart.

Billy moved from place to place living in motels; the life style choices and addictions eventually brought great damage to his body.  In 2010, two drug dealers in Houston pinned his legs with a car and beat him badly. He spent four weeks in ICU, but declined further surgeries to put his bones back together, and hence his leg strength can only handle about 10 minutes out of the wheelchair.

Fast forward to 2013 at age 58, he was continuing his free-wheeling motorized chair journey of “any town” USA and found himself in Alabama receiving a Bible tract from a young family as he sat in his wheelchair on the street corner. The two young children in this family were innocent and tender; his usual brash dismissal was silent.  He received the salvation tract, and began reading it.  The evil one tried to get him to put it down; but Billy didn’t. He said the sinner’s prayer, and then found himself enveloped in a cloak of warmth and protection and security, knowing at that moment “everything is going to be OK.”  He thought, “Is this LSD” or some other drug-induced state of mind, but he wasn’t on any drug!  Jesus Christ and the Holy Spirit made a home in his heart. It changed his life.

Spiritual progress can show itself in many ways; for Billy staying out of the bars and living clean is a huge step. His wandering wheelchair journey of America included Breezewood for five weeks in a motel room and an occasional lapse into old habits, but I celebrated his progress not his (im)perfections. No one but Jesus is perfect; we are all a work in progress. Encouragement begets more courage and affirmation begets more determination for a Savior worthy of His promises. I thank God for His love that meets Billy right where he is. That’s a promise God made to all.