This past Saturday, April 21, marked the launch of the #ImagineNoRacism (INR) initiative that the Bishop’s Taskforce on Eliminating Racism has spent months planning.

The launch took place simultaneously across all 12 Upper New York Conference districts and began with a moving worship experience. 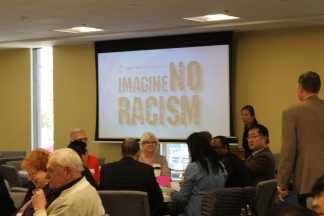 The Common English Bible’s rendition of 1 Corinthians 12:4-14 was used for the scripture reading, reminding INR launch day attendees that, “We are all baptized by one Spirit, one body, whether Jew or Greek, or slave or free, and we all were given one Spirit to drink. Certainly, the body isn’t one part, but many” (1 Corinthians 12:13-14).

The worship experience also included a baptismal remembrance, which focused on the repentance of the sin of racism and the affirmation to teach the faith of the whole Church and to serve as Christ’s representatives in the world.

Opening Worship ended with the Amazing Grace video by Pastor Wintley Phipps, an ordained Seventh-day Adventist minister. Pastor Phipps discussed the history of the song Amazing Grace. He mentioned how it was written by John Newton after he converted to Christianity.

Pastor Phipps explained that prior to Newton’s conversion, he was active in the slave trade. The lyrics of the song portray how God’s grace saved Newton from the wretchedness he experienced running the ships for the slave trade. Phipps also mentioned that the Amazing Grace lyrics are said to be written by Newton, but the melody’s creator is unknown. Phipps feels strongly that the melody was formed by slaves on ships, as it has evident African hymnal notes, which interestingly use the pentatonic scale (the black keys on the piano).

The Amazing Grace video was shown to remind all launch day attendees that despite different ethnic and racial backgrounds, they are all connected by God’s amazing grace.

After Opening Worship, Upper New York Area Resident Bishop Mark J. Webb’s welcome message was live-streamed from the Upper New York United Methodist Center. Attendees were reminded of the Northeastern Jurisdiction’s Call to Action to address, confront, and demand systemic, fundamental, and institutional change within The Church and the world to work toward the elimination of racism.

Small groups were formed among attendees based on their geographical location. As these small groups are required to meet at least six times in the coming months, they planned meeting locations and dates.

Each small group also had to select a facilitator who must attend a six-hour training in May, convene the group using the full curriculum provided from their INR District Advocate, and connect regularly with the District Advocate – sharing progress, concerns, and needs. They must also communicate with their groups any changes to meetings as well as information from the Conference. 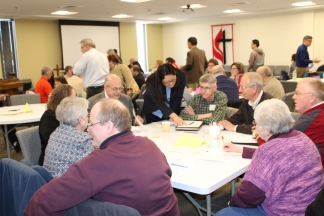 After conversation and planning, the small groups watched videos featuring members of the UNY Conference. The first video featured the Rev. Harold Wheat, Christine Doran (former assistant to the Bishop), and Adirondack District Superintendent the Rev. Bill Mudge. They discussed racism and white privilege. The second video featured Dr. Scott Johnson, who talked about the importance of thinking beyond individual racism to look at the challenges caused by systemic racism.

Each small group discussed their thoughts about these videos.

The educational component of INR ended with a video from the Rev. Teressa Silvers, convener of the Bishop’s Task Force on the Elimination of Racism. Rev. Silvers spoke of how racism exists even in The Church and that the first task of the small groups is to “listen, learn, and seek understanding of both personal and systemic racism.”

At the INR launch day’s closing worship, everyone was given the opportunity to receive sacred water and remember their baptism. They were also asked to consider signing an individual Imagine No Racism covenant.

The covenant reads, “Before God and with my family in Christ, I vow, with the help of the Holy Spirit, to oppose and to eliminate the influence of racism from systems, institutions, relationships, and my own life.”