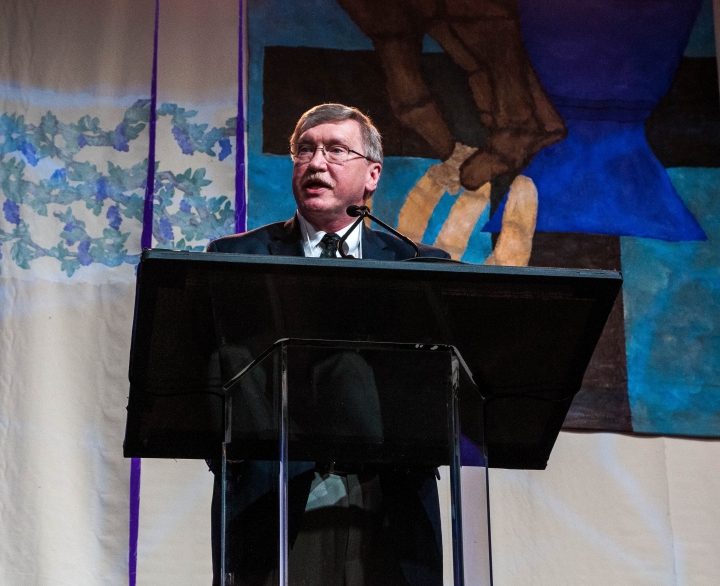 The Rev. Loren Swanson, chair of the Commission on Equitable Compensation (CEC), presented the CEC Report on June 3. He said among the commission’s responsibilities are to insure that a healthy balance exists between clergy and level of support and to help churches in financial difficulty come to sustainable solutions.

Rev. Swanson presented five recommendations on behalf of the commission.

The first recommendation called for a raise to the minimum compensation level guaranteed to pastors by two percent for the budget year 2017. It was supported.

Recommendation two proposed a change in the years of service increment. See the Journal Vol. I, page 24, lines 38-40. It was supported.

The third recommendation added a provision for additional salary for multi-point charges that read, “Plus an additional $500 for each additional church on the pastoral charge (over one), not adjusted for part-time appointments.” It was supported.

Recommendation four revised item E in the Journal Vol. I, page 25, lines 30-31, that tied raises for pastors related to cost of living to the 10-year average increase in the Consumer Price Index, rather than the Conference Average Compensation, which was formerly used. The recommendation was supported.

The fifth recommendation added a paragraph to the Journal Vol. I, page 25, lines 17-25, which designated a fiscal amount to be designated for a pastor’s continuing education within the Accountable Reimbursement Plan. Some voiced concern about this addition, while others stressed the importance of effective leadership.

“For us to have effective learning leaders, there has to be willingness in churches,” said Oneonta District Superintendent the Rev. Jan McClary Rowell. “It’s important that the church alongside the pastor see that continued training is very essential to know what it is to be leaders in the church at this time.” The recommendation was eventually supported, and the report was received.