March 9, 2016 / By Kathleen Rubino / .(JavaScript must be enabled to view this email address) 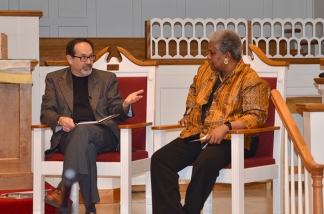 “I was very pleased with it. I thought everybody was very respectful and listened well, although they were very clear on what they thought …” said the Rev. Marty Swords-Horrell, pastor at Christ UMC in Troy and a member of the task force.

“It’s important to have conversations like this one that help us more deeply engage,” Bishop Webb said. “We are in an important time, not just in The United Methodist Church but in the life of the Christian Church.”

The Rev. Bill Gottschalk-Fielding, Conference Director of Connectional Ministries, Executive Assistant to the Bishop, and a member of human sexuality task force, welcomed everyone to the forum and outlined the format: each speaker would have time to present, followed by a time for dialogue between the two, and conversation with the audience.

Rev. Arnold presented first, speaking about everything he wouldn’t touch upon in his speech, from hermeneutics to various sections of Scripture. Rev. Arnold addressed some of the clobber passages – Bible passages that involve homosexual behavior – that he feels “are exclusively negative about same-sex practices.” He noted that the institution of Christian marriage came before the introduction of sin to the world, as evidenced in Genesis 2:22b-24. He also touched on Genesis 1:26-27, where God created male and female, and pointed out how the plurality of God is reflected in the plurality of humankind.

Rev. Arnold said he believes that in Matthew 19:4-6, heterosexuality is: God’s design (God created humans as distinct males and females), God’s institution (he instituted marriage to be between a man and a woman), and God’s plan. Based on compelling pieces of Biblical data, Rev. Arnold believes homosexual practices are incompatible with Christian teachings.

Rev. Spencer-Miller took the podium next, starting her presentation with the metaphor of the chicken and the pig. The chicken says to the pig, “Let’s have eggs and ham for breakfast.” For one, it is a matter of laying eggs. For the other, it’s a matter of giving up their life. Having this breakfast impacts the pig more than it does the chicken. Rev. Spencer-Miller outlined the challenges she has faced as a gay, black, ordained, single mother.

“I feel a bit like a pig this afternoon,” she said.

Rev. Spencer-Miller discussed in depth her hermeneutics – the art and methodologies of interpretation, especially as they relate to Biblical literature. She stated that Christians are taught to disdain the homoerotic experience, but believes that increased knowledge and understanding might reshape our theories.

“This polarized conversation needs a new lens,” she said. “If we go deeper into the hermeneutical conversations we may have new compasses.”

Rev. Spencer-Miller argued that the Bible is tendentious and that it disagrees with itself. For example, the Bible intones about family values, yet Abraham sells his wife into prostitution. She said people can argue over the “clobber passages”, but this will only result in disdain. Instead, she invited the audience to embrace the complexity of Scriptures, rather than to act like one narrative is the only compelling narrative.

Rev. Spencer-Miller also noted that Jesus was homosocial, as all of his disciples were male. She said these Biblical issues are not so much about human sexuality but are restricted to homosexuality.

“Underneath the issue of sexuality are issues of power,” she said. “We get to choose what questions we ask of the Bible … [We can] start as if we are all Eurocentric males or we can start mirroring the complexity of Scripture.”

After a short break, Rev. Arnold and Rev. Spencer-Miller engaged in respectful dialogue with each other.

“I was really fed by their ability to interact with each other,” said Dr. Scott Johnson, Conference Lay Leader and a member of the task force. “I thought that made the conversation go to different places than we normally hear. I took a lot away both in terms of substance and also just hearing the engagement; it was really helpful.”

“I really, really appreciate the opportunity to sit and listen to two people who, coming from different perspectives and presuppositions, are able to articulate their theologies and discuss specific texts in a very amicable way,” said the Rev. Dr. Bill Allen, pastor at the Bemus Point UMC and a member of the task force. “I think maybe one of my hopes for the task force is to always bring respect to people who are differing on issues, and I think today is a good example of respectfulness offered and received for two differing opinions.”