Editor's Note: Mary Lou Buck is a very active member of Upper New York’s Early Response Team. In an article, originally published in the Spring 2020 edition of the Advocate, Mary Lou relives the ERT process that was used in cleaning up communities in the Mohawk District that were impacted by a strong storm and resulting flooding on Halloween night in 2019. This article is a great “big picture” of the process that Early Response Team members use when volunteering in areas impacted by natural disasters.

The Sauquoit Creek became a monster on Halloween night. Looking around, we see some homes have tape around them. On closer inspection, I realize that part of the foundations were washed away. Homes with a big red X on them have been condemned. Some houses have piles of possessions and appliances at the curb. One homeowner was walking down the street. We stopped to talk to him, and I was surprised that he had remembered my name from two years ago when I had worked at his home after flooding. Since his mobile home was washed off its foundation this year, he could not work on his home so he was helping his neighbors. 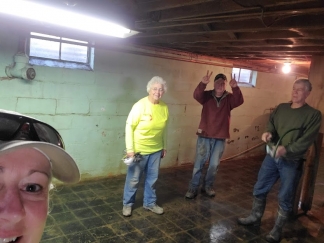 After the initial impression, we go into houses to help homeowners clean up. We see that the water in some basements came as high as the joists for the first floor. A few had their main floor flooded. We take possessions to the curb, shovel mud to remove it, and remove wet drywall and flooring. Another important job is listening to the homeowners tell the story of their experience, which helps in their healing from this disaster. It was a joy to be able to give them a donated prayer shawl.

We met homeowners as we began the cleanup process. One gentleman, with health concerns, had a hard time talking because he was shivering so much. He tried to keep his pipes from freezing with a space heater and needed his basement emptied so that his furnace could be replaced. The temperature that day was 9 degrees.

An elderly lady who had a finished basement needed us to remove the walls, floor, and ceiling because the water had damaged it all. She had been assured that the flood mitigation projects in her area would prevent flooding. She will not be finishing her basement again.

One homeowner was so surprised to learn that most of the people on the team were older than he was. He was very protective of the senior citizen ladies on the team, and he made sure that he carried the heavy buckets of mud up the stairs for us.

Many of the small communities, that were hit by this flood event, contain poor areas with no flood insurance and very limited finances for recovery, and they absolutely needed our help.

In this one event, there were 800 homes damaged, with 230 homes sustaining major damage. Seventy homes were destroyed or condemned. One-hundred-sixty homes needed to be cleaned out and debris removed and three-hundred homes had gas and electric turned off and needed furnaces and hot water heaters serviced or replaced. Since it was extremely cold, it was important to complete this work as quickly as possible.

We helped homeowners of various religious beliefs. The work was very rewarding because we knew we were being God’s hands and feet as we witnessed to the homeowners in both word and deed. Homeowners mentioned how grateful they were, and they were impressed that we were willing to get dirty and work for free as we demonstrated Christian love. We felt inadequate, however, because the laborers were few, and we could not help everyone who had been impacted.

Even though I just met some of the team members, we all worked well together and everyone helped to accomplish work that needed to be done. Training is available for anyone who would like to join a team. Being on an Early Response Team is a privilege because we feel blessed every time we