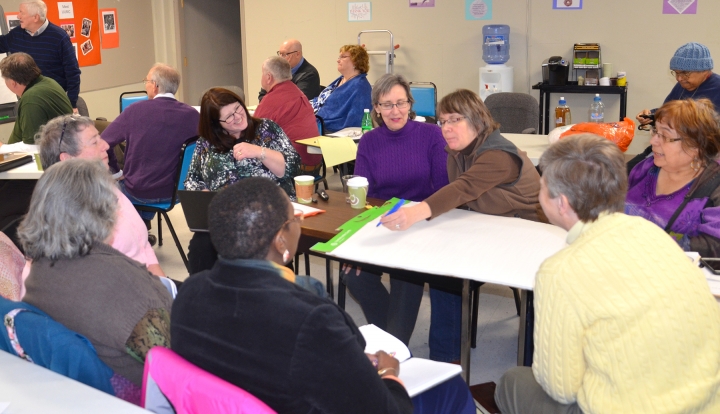 As the Upper New York Conference Connectional Table gathered in Syracuse on March 19, there was an energy in the room. In part, it may have been the changing weather and that the following day would be the first day of spring. Mostly, there was a sense that people were ready to move forward in the shared mission of making disciples of Jesus for the transformation of the world.

Turnout was much larger than expected, and even as the agenda was handed out there were questions about what the day would actually look like. The time together started off with an opening worship, and then the work began as a variety of topics were discussed.

The gathered group of Cabinet, Executive Staff Team, Conference Leadership Team, and leaders of various Conference boards and agencies first listened to an update on financial realities, but before the discussion delved too deeply into finances, the agenda was altered to refocus on the Conference’s connectional structure and changes to the current format.

“I just feel we need to be sure that form follows function and not the other way around,” explained Upper New York Area Resident Bishop Mark J. Webb.

Moving forward, the gathered group of leaders looked at how best to lead the Conference in a way that truly connects individuals and local churches while keeping the local church at the center, because that is where disciples are made.

“Our current leadership structure is the result of how leadership worked in the four former conferences,” said Scott Johnson, Conference Lay Leader. “This structure was probably needed for a time, but now it’s time to think about what is best for us now – what will best allow our local churches to make disciples.”

In the end, two important decisions were made.

First, the decision was made to eliminate the Ministry Oversight Teams. The primary function of these teams was to distribute funds in a primarily local ministry context; the downside was that they were Conference-wide teams. The feeling shared by many was that having the District Leadership Teams manage these funds will let individuals closer to the local church and more familiar with the local ministries be the decision makers in empowering local ministry.

Second, it was decided that this would be the final gathering of the Connectional Table. While it was acknowledged that there is a need for Conference leaders to gather for learning, spiritual growth, and sharing information, it was also expressed that having this Connectional Table body gather once per year is not an effective way of doing that. Moving forward, the hope is not to lead from the top down, but to lead locally and distribute shared resources to support vital ministry.