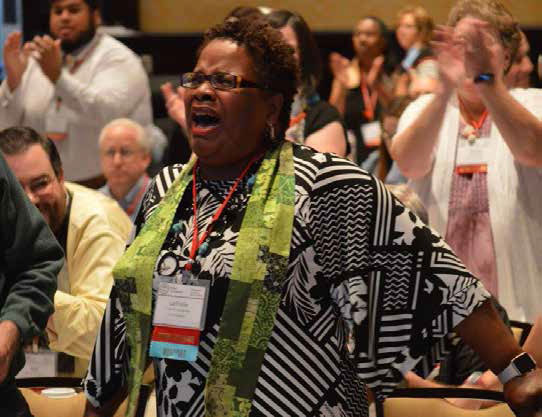 July 18, 2016 / By UNY Communications / .(JavaScript must be enabled to view this email address)

LaTrelle Miller Easterling, Metro Boston Hope district superintendent in the New England Conference, has been elected a bishop of The United Methodist Church. She was elected Thursday morning, July 14, on the 17th ballot of the 2016 Northeastern Jurisdictional Conference in Lancaster, Pa.

“I always, always, always stand on the side of justice,” she said after she was introduced to the gathering by Bishop Sudarshana Devadhar, “but I draw the circle wide enough for all of us to be there and when I say all, I mean all.”

Devadhar called Easterling “a prophetess, a pastor who leads the church from her spiritual center, and above all, a beloved sister in Christ who always, always has a passion for the marginalized.”

Rev. Easterling served Union UMC and Old West UMC in Boston and Pearl Street UMC in Brockton, MA. She was a delegate to General Conference in 2012 and 2016, and served on the NEJ’s Multi-Ethnic Center Board. She also served on the Conference Board of Ordained Ministry.

When asked about her self-care practices, Rev. Easterling said that along with keeping the Sabbath, she visits to the beach and writes “prayers, litanies, liturgies, songs, laments,” Rev. Easterling said, “I read the word of God. I am inspired by it. It gives me new life, it gives me energy. It’s one thing to be read- ing the word of God for sermon preparation, or Bible study preparation, but I’m still a disciple of Jesus Christ. My relationship with Christ is still growing. I need to have my own firm rootedness and connectedness. Some- times when I read it, I get so excited I have to walk around the room a little bit ...”

Rev. Easterling has a law degree, and before entering full-time ministry worked as a mediator and as a Human Resources Manager and Director. She is married to the Rev. Marion Easterling, Jr., the pastor of Parkway United Methodist Church in Milton, MA. They are the parents of two sons, Garrett Walter and Miles Teronza.