The Cameron Mill United Methodist Church closed in December 2012. It stood in disrepair – infested with bees and flooding in the basement – until a young couple stepped in.

Dalton and Autumn Cady, then 20 and 22 respectively, initially bought the house next the church in September 2016.

They heard a buyer was interested in turning the church into a storage facility and decided to buy it. Mountainview District Administrative Assistant Patti Gridley, who knew Autumn’s grandmother, helped connect the pair with those who could assist with the sale.

Dalton, who works as a barber, said part of the reason he was interested in the church is that he’s idea-oriented and sees the potential in things. 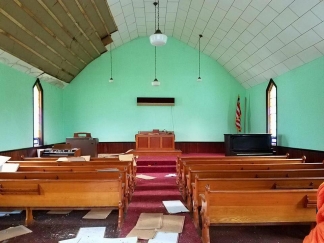 “I'm always thinking of stuff to do it with old buildings,” he said.

They closed on the church in December 2016, but a month earlier during a housewarming party, Dalton and Autumn, who works for the Corning Museum of Glass, took their guests over to the church, where Dalton surprised his future wife with a proposal.

The first big project they tackled was the roof.

“It's pretty impressive,” Patti said. “There are just so many neat things about how far this church has come … to become a beautiful space again.”

The couple’s July 2019 wedding was the driving force behind the renovation. Not only was the former church the site of their engagement, but they also wanted to have their wedding there.

Dalton said they worked up until midnight the night before to get things ready. And it was a family affair in many ways, as relatives helped with the renovation. Autumn’s grandfather even made sure there was a special touch for the duo’s big day.

Prior to the wedding, he had researched and worked on a cross that would mimic Jesus Christ’s cross. However, just weeks before the big day, the grandfather’s barn – and the cross inside – burned down. 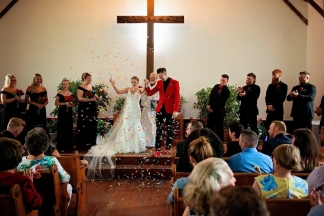 Nobody expected a cross to be present for the special occasion, but Autumn’s grandfather showed up two days before the wedding with the massive cross in tote.

“It was pretty neat, too, because he said that he did research on it,” Dalton said. “And he said that he was within a few pounds of Jesus’ actual cross … and the size is pretty amazing.”

Licensed Local Pastor Mort Gridley, who served at the former Cameron Mills UMC and currently serves the Rathbone UMC, married the couple in the new space.

The couple plans to use the space – now referred to as The Church Cameron Mills – as a venue, predominantly for weddings, but they also hope to host concerts in the future.

“We hope it's a place where everybody can feel comfortable coming in and everybody can use it and get joy out of it and make their memories here,” Dalton said. “Because it went from a building that was the center of the town for 100 and some odd years before it closed down. And now we're hoping to help that live that on for another hundred or so years.” Click here for more information about the venue