Why observe Oct. 6 as day of truth and repentance for Native American children

September 13, 2021 / By Shannon Hodson and CONAM / .(JavaScript must be enabled to view this email address)

On Oct. 6, 1879, Capt. Richard Pratt opened the first Indian boarding school in Carlisle, Pennsylvania. For almost 100 years until the 1960s, thousands of Native American children were forcibly taken from their homes and trained to reject their heritage and do manual labor. The United Methodist Church supported at least 12 Indian Boarding Schools. The Native American International Caucus (NAIC) of The United Methodist Church is calling on United Methodists to observe Oct. 6 this year as a day of truth and repentance for children who were victims of Indian boarding schools. 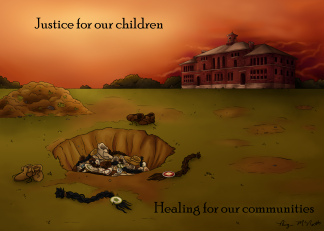 “This unresolved historical trauma associated with the cultural genocide and years of stripping Native Americans of their culture, land and language through the church and government-sanctioned boarding schools with the motto ‘Kill the Indian, Save the Man’ has wreaked havoc on Native American families,” said the NAIC in a recent news release.

Fact #1: Native children were forcibly removed by the hundreds of thousands from their homes and put into residential schools, where they were abused physically, emotionally, and sexually. The Carlisle Indian Industrial School (CIIS) in Pennsylvania was the flagship for these “schools” all over the US and Canada. Following attempts of extermination and expulsion from PA, Natives from outside the Commonwealth were also forcibly relocated to the CIIS for assimilation into white society.

Fact #2: The UMC has never accepted responsibility for its role in supporting Boarding Schools for the forced removal of native children which sought to eliminate native languages, culture, and traditions and for the resulting intergenerational trauma.

Fact #3: The National Native American Boarding School Healing Coalition (NABS) has identified 367 historically assimilative Indian boarding schools that operated in the U.S. between approximately 1870 until 1970. However, NABS has only been able to locate records from 38% of the boarding schools that we know of.

Fact #4: The Native American Boarding Schools were a form of genocide. The bones of over 1,000 children have been found in mass graves owned by church run schools in North America, with some as young as three years old, have been found. As the tally of missing and murdered Indigenous women and girls, which is already 10 times the national average, grows; and as the echoes of historical trauma toward our children, as forced removals continue to this day, reverberates throughout Native American communities in North America, and the call to address the horror of abuse and the consequence of genocidal policies is once again brought to the forefront.

The NAIC is also calling for The United Methodist Church to commit to discovering the locations and find what records are left of Methodist-run Indian boarding schools.

“We demand that the Church search out, listen to and collect the oral stories of those family members whose ancestors were impacted by a Methodist boarding schools,” the release said.

You can read the letter that the NAIC sent to the Council of Bishops by clicking here.

The Upper New York Committee on Native American Ministries has participated in opportunities for individuals to learn about the history of Boarding Schools and the Church’s role through a series of District trainings.  UMW Mission U offered education opportunities, teaching “Giving our Hearts Away, Native American Survival”. Countless Native American Ministry Sunday presentations have shared the Boarding School history.  It is now time for time for the Church to own its story through truth telling and action.

You can read a letter that UNY CONAM wrote endorsing the letter from NAIC by clicking here.

Remembering the Act of Repentance:

Action toward improving relationships with indigenous people were called for almost nine years ago at the 2012 United Methodist General Conference — the Church’s top legislative body — they held an “Act of Repentance Toward Healing Relationships with Indigenous People” service. At that meeting, the body also charged the denomination’s Council of Bishops with carrying out an ongoing process to improve relations with indigenous individuals including local or regional acts of repentance.

This charge is recognized in Resolution 3324(Trail of Repentance and Healing). You can read more about the dozens of actions the resolution recommended by clicking here.

All churches in Upper New York are being asked to consider observing Oct. 6 on the Sunday after, Sunday Oct. 10.

Some suggested ideas include:

It's important to keep your committment to the Act of Rembrance indefiitely and Oct. 6 is just one way to do so.

With more than 134,000 members, the Upper New York Annual (Regional) Conference of The United Methodist Church comprises 865 local churches and 85 new faith communities in 12 districts, covering 48,000 square miles in 49 of the 62 counties in New York state. Our vision is to “live the Gospel of Jesus Christ and to be God’s love with our neighbors in all places."