The Table is set

In the Opening Worship Service at the 2016 Annual Conference of the Upper New York Conference of the United Methodist Church (AC16), Upper New York Area Resident Bishop Mark J. Webb reminded us of two promises God has made:  “Through Jesus Christ we are chosen by God” and “Through Christ we are given power for the plan.” The theme of opening worship was “The Table is Set.” Bishop Webb explained what that means in the closing of his Opening Worship sermon; he said, ““The United Methodist Church will be in great shape when everyone, including me, goes to the table and trusts the grace of God and sufficiency of God.” Click here for more details about Opening Worship. 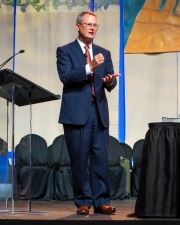 The featured Study Session leader of the Conference was the Rev. Adam Hamilton, founding pastor of the United Methodist Church of the Resurrection in Leawood, Kan. He led the Conference in three 90-minute training sessions throughout the day on June 3.

In his first lesson, Rev. Hamilton described the role of leaders. He said leaders set the tone of the organization, clarify and champion the mission and vision, hold the organization accountable to accomplish the mission, are responsible for preparing the organization for the future by leading change, and evaluate and celebrate victories, while also addressing shortcomings.

Rev. Hamilton’s fifth principle was particularly poignant; he said, “What [principle #5] says is that if you have two possible paths in front of you and one of them is easy and safe and doesn’t challenge you at all and the other one makes you feel a little sick to your stomach when you’re thinking about it, which of those two paths do you think God is most often calling you to?...The one that makes you a little sick to your stomach. Jesus talked about two gates, two ways, one is broad and wide and leads to destruction and one is narrow and hard and leads to light. What I have found in local churches is that we make decisions every year that are mission-critical to churches and what we place before our church councils (as to whether to take) this path or that path, almost always, we choose the easier path. And choosing the easier path is a guaranteed way of never really achieving all that God is calling your congregation or you personally to achieve.”  Click here for more details about the first Study Session.

In his second session, Rev, Hamilton focused on effective worship and preaching. He discussed five components that are essential for a preacher to use in order to connect with the congregation. Sermons need to:

Click here for more details about the second Study Session.

Rev. Hamilton’s final Study Session included tips for churches on how to prepare for visitors, an emphasis on connecting evangelism and social justice, and advice on how to transition someone from a visitor to a member. Click here for more about the third Study Session.

“There is a very honest grief in ‘Lamentations,’” she said. “The author does not propose any easy answers. No ‘things will be okay.’ No ‘this too shall pass.’ Just raw grief and lament. The first 16 verses of Chapter Three get pretty intense. The image of God is not pretty, and the believer is not afraid to utter it. Fortunately, by verse 17, the mood turns, and one last summary leads into verse 21, in which God’s lasting and eternal quality of hesed (loving kindness) is recalled.”

Rev. Anderson acknowledged that despair is an automatic response to grief. She likened despair to a computer’s default settings.

“Each of us has a ‘despair’ default,” Rev. Anderson said. “If we don’t reconfigure our minds, we slide down the slippery slope of discouragement and complaint. In order to break out of the pattern and cycle of despair, Jeremiah needed to be vigilant about what he allowed himself to think about. He needed to bring other things to mind.”

Click here for more details about the Memorial Service.

The leadership report, on June 3, zeroed in on the goal of the Conference to equip local churches with what they need to develop leaders. Susan Ranous, Financial Advisory Consulting Team (FACT) Project Manager, mentioned the need for local churches to be given resources to help them thrive. “The Stewardship Foundation will offer resources, education, and encouragement to local congregations as well as helping us provide ministry and mission in the local church and beyond,” she said. Examples of how local churches have developed leaders were given.

Also, the concept of leadership as it relates to revitalizing and planting new churches was presented. Testimonies were given about churches that have found revitalization though programs such as hand-to-plow. A video about Casa de Dios in Syracuse was played, showcasing how this Spanish-speaking new faith community has grown from seven people to more than 40 people. A video about the Pillar in Rochester, was also shown, illustrating how this new faith community has invited people to come to the table through concerts, comedy shows, and festivals.

“There is no reason not to leave this table full and with enough to share,” said the Rev. Bill Gottschalk-Fielding – Conference Director of Connectional Ministries and Executive Assistant to the Bishop. Click here for more details on the Leadership Report.

Day two (June 3) of the 2016 Annual Conference ended with an electrifying Celebration of Ministry Gala, which mirrored the Academy Awards. This celebration included gold Bobble Webbs, musical transitions between recognitions, and envelopes with the names of those recognized, including the 35 retirees. Click here for more details on the Celebration of Ministry.

On June 4, two episcopal nominees were endorsed by the Annual Conference as prospective bishops to go through the process of balloting at the Jurisdictional Conference. The nominees were the Rev. Beckie Sweet and the Rev. Cathy Stengel.

After much deliberation, the Conference budget passed with an added motion for CF&A to lead the production of a narrative budget that includes one paragraph describing the ministry and priorities of each line item in our 2018 ministry share budget for the 2017 Annual Conference to be posted on the UNYAC website at least two weeks prior to the 2017 resolutions and petitions deadline of February 1, 2017. This motion was further amended that through March and April of 2017, there be regional listening and interpretation gatherings for the entire conference. Click here for the full budget article. 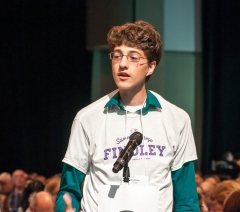 In addition to deliberation over the budget, there was a lot of deliberation over the resolution to close and sell Findley Camp & Retreat Center. On June 3, the Rev. David Cooke of Findley Lake UMC motioned to refer this resolution to the Trustees and Camp and Retreat Ministries to have them explore more options through conversation with the Family Bible Camp Board, Findley Lake UMC, and Fit 4 Life Ministry, and a recommendation by brought back to the 2017 UNY Annual Conference. This motion passed.

Because of the passion around Camp Findley, Adirondack District Superintendent, the Rev. Bill Mudge brought forth a motion to require every UNY congregation to appoint a Camp and Retreat agent with their leadership selection in 2016 to begin serving in 2017. This motion was also supported.

On June 4, Rev. Cooke proposed a substitute motion to the motion that was supported on June 3. He resolved, that the Board of Trustees be given the authorization, by the Upper New York Annual Conference, to determine the future use of Findley Camp & Retreat Center, based on the conversations with CRM, other interested UMC Cornerstone District congregations, and other interested Cornerstone District parties. If the participating parties have not defined a mutually acceptable alternative by September 30, 2016 the parties may continue their efforts and the Board of Trustees of the Upper New York Annual Conference, in accordance with paragraph 2516 of The Book of Discipline, hereby may sell the property presently occupied by Camp Findley and hold and restrict the proceeds for capital expenditures for other Camp and Retreat Ministries. This substitute motion was supported as amended.

Of the nine resolutions, two were withdrawn, two were not supported, and five were supported as follows:

UNYAC2016.3 – Restoration of Funding for Campus Ministries, supported with an amendment to include local churches in the process being developed to apply for funds.

UNYAC2016.5 – Restoration of Funding of the New York State Council of Churches, not supported

UNAYC2016.8 – A Resolution to Study and Consider Carbon Pricing, supported 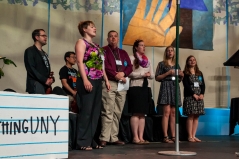 On June 4, an early-morning worship service was led by young people. The service began with speeches by “bishop” JJ Warren, former Conference Council on Youth Ministry (CCYM) Co-Chairs Emily Allen and Maya Smith, and others. After the speeches, there was a spoken word performance by Laurel O’Connor, Africa 360 field coordinator, and Riley O’Flynn. The overall message was to “DO something!”  The service concluded with those gathered writing down on index cards what action God has called them to do this year, and posting them to a big board at the front of the room. Click here to read the full story about the Young People’s Worship Service.

Service of Ordination and Commissioning

On June 4, AC16 ended with the Service of Ordination and Commissioning, in which seven individuals were ordained and four individuals were commissioned. Bishop Webb’s sermon, “Called, Equipped & Completed” could not have been more inspiring.  He reminded everybody, “Every single one of us is vital in God’s plan.  Each of us has gifts that are necessary.  Every role is needed – every function vital!  We are called to be the Church of Jesus Christ – together.  It’s a big deal!  It’s an amazing invitation and it’s an overwhelming responsibility.” Click here for more details on the Service of Ordination and Commissioning,