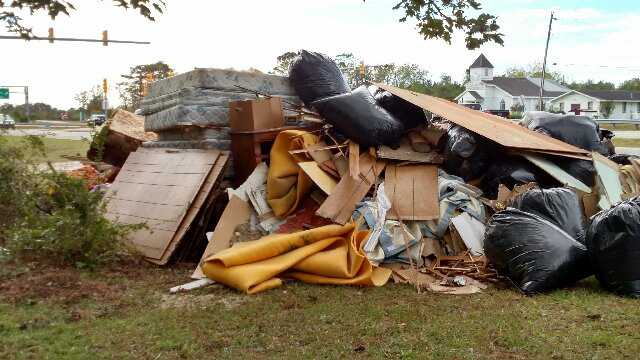 Editor's Note: Bryan Roy joined an Early Disaster Response Team (ERT) heading to the Wilmington, NC area to help with the clean up after Hurricane Florence. Having received ERT training last year, Bryan joined a local ERT mission to Lodi Point, NY one day this summer after that area was hit with disastrous flooding. This NC ERT mission from November 4-10 was his first long-term effort to help those impacted by disasters. Below is an interview with him about his experience.

Where did you stay while you were there?

Our team was sent to Wilmington, NC where local ERTs had been helping since the storm but needed additional support to address all the needs. We were hosted by the Wesley Memorial United Methodist Church who gave us access to a house on their property between their Sanctuary and Activity Building. We slept on air mattresses in a few rooms, used their kitchen to cook our meals, and gathered around a table in a larger room for meals, daily debriefs, and devotionals.

What kind of damage did you see?

Hurricane Florence hit North Carolina on Sept. 14 with strong winds that took down many trees and caused a lot of roof damage. However, the more damaging impact was the heavy rains that followed for several days. The Wilmington area didn’t experience much flooding like some other parts of the state, but buildings with roof damage leaked and caused water damage from ceiling to floor.

Who was on your team?

Our ERT Team started with a trained team leader volunteering to facilitate the mission, then an announcement was sent to all trained ERTs in the Upper New York (UNY) Conference. Fifteen individuals volunteered for this particular group, coming from churches around Buffalo, Jamestown, Rochester, Syracuse, and Utica. Many had been on several prior ERT trips, while some, like me, were participating on their first long-term mission. One member towed an ERT trailer full of tools, while everyone else brought additional items that might be needed so we could be ready to tackle any project assigned to us.

What kind of work did you do while there?

With a larger group, we were able to split into teams to address several projects at once. One team cut up a large tree that came down in someone’s yard; a small team repaired a mobile home that had minor water damage in one room, and the rest worked on a ranch that sustained significant water damage (broke through the ceiling in several places). After removing and recovering any valuable items from the home, we ended up gutting the entire house down to the studs by removing all carpeting, walls, ceilings, and insulation since all had moisture that would mold if left.

ERTs only work on properties where homeowners request help, and we recommend they be available to determine when things should be saved. The process is hard for many homeowners and ERTs are trained to provide them support through all of this as well. The ranch was owned by an elderly woman, who was staying with her daughter, but the son (who grew up in this house) worked beside us the entire time and was so grateful for our help.

What did this experience mean to you and would you do it again?

Our team accomplished a lot in the short time we were in Wilmington with the stuff we removed from the house, repairs to the trailer, and trees that were cut up.

However, I feel our biggest impact wasn’t measured in the stuff we hauled to the curb. We were able to lift the spirits of these homeowners and it felt so wonderful to receive their gratitude. Even more than that, the fact that long-distance “neighbors” were willing to come and help raised the spirits of the numerous local volunteers that have been working on disaster relief efforts for several weeks. I also really enjoyed the comradery and faith of this group that quickly became a family in the short time we were together.

Is this something that others from our church family could do?

Absolutely. The ERT training is offered regularly by our UNY Conference and in some cases, the teams will accept untrained ERT members that will learn on the fly. Unfortunately, disaster relief will most likely be in greater need in the coming years. On the heels of Hurricane Florence, there was Hurricane Gordon that hit the Florida panhandle hard and now the wildfires in California. Several Caribbean nations are still need recovery support from last year’s disasters. However, you don’t have to even go that far to find disaster recovery needs. There have been flooding disasters throughout the Northeast over the past few years, including right in our own backyard (Mohawk, Sauquoit) that have brought in ERTs for help.