November 17, 2020 / By Shannon Hodson / .(JavaScript must be enabled to view this email address)

“I’m going to show God’s love through all I do with extreme hospitality.” This is what David Weber calls his mantra. And he is excited to live out his mantra as Casowasco Camp & Retreat Center’s new Site Director.

David was born in Buffalo, NY, a son to a Methodist pastor. His father moved to different Conferences with each new appointment so David has been a part of the Maine Conference (prior to it becoming part of the New England Conference), the Pacific Northwest Conference, and the Desert Southwest 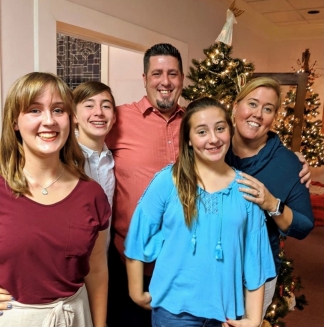 Conference, and also lived in Delaware and Maryland as a child.

His first time experiencing the Methodist Camp ministry was in third grade, when his parents enrolled him in a summer camp program at Camp Pecometh. The time spent at Pecomenth each summer between third and sixth grade was his favorite time of year.

“David said, “Being at Camp Pecometh was the first time I experienced unconditional love for who I was.”

Every year around Christmas time, David was just as thrilled to peruse the Camp Pecometh summer camp catalog as he was the Toys ‘R Us catalog.

In seventh grade, his parents began sending David to Camp Mechuwana in Maine. He did a canoeing program---there, he was able to canoe and camp along Maine’s beautiful rivers and lakes. He recalls God talking to him one evening on an island in the middle of a huge lake; God said, “You’re going to be involved in Christian camp and ministries for the rest of your life.”

And God’s promise held true. David earned a B.S. in Recreation at Green Canyon University in Phoenix. Through college, he was a camp counselor or lifeguard at Camp Mechuwana, Blue Mountain, and Epworth Camp & Retreat Centers. He said, “This work is my dream, my biggest passion1”

After college, David worked in programming at Camp DonLee in North Carolina; it was there that he learned that the camping ministry could be year-round. He said, “The best thing about Camp DonLee was I got to meet my wife!”

He, his wife and three children are ecstatic to come to Casowasco, which is located very close to many family members who live in Buffalo, Ohio, and Pennsylvania.

David said, “I love to be coming to a camp and retreat center that is so established and healthy and with such great hospitality—my favorite part of camp and retreat ministries. I am so exited about the diversity of programming that Casowasco offers through all the seasons.”

David realizes that the camp experience may have to shift for a while to be safe during the COVID pandemic. He said, “At this time with the pandemic, we are going to have to get creative. I can’t wait to connect with alumni to see how they may be able to help with their time, talent, or treasures. We may have to adjust to more family and small group experiences for the time being. In the summer, we could try things like outdoor concerts or food truck rallies.”

Having video meetings with the Upper New York Camp & Retreat Ministries Team, David said, “I feel very welcomed already and I haven’t even started yet. I am so excited to become a part of the Upper New York family. God pushed me through this door, and I am so glad he did.”

The Rev. Bill Gottschalk-Fielding, Upper New York Assistant to the Bishop and Director of Connectional Ministries said, “The interview team was very impressed with David’s passion for Christ and camp and retreat ministries.  I was impressed with the way he connected with Casowasco staff during the interview process and his desire to build a strong site team. I’m so grateful David and his family will be coming to Upper New York and look forward to what God might do.”

Rev. Gottschalk-Fielding also thanked Anne Horton for her time as interim director of Casowasco; he said, “When Anne agreed to come, we thought we’d be experiencing a normal summer. She literally arrived the first day of the lockdown in March. From then on, nothing was normal!  But God had a plan. Anne provided the seasoned and steady leadership we needed. She’s been a gift to Casowasco, the CRM Lead Team, and to me.”

David begins his position on Dec. 1.