Each year, the UNY Committee on Native American Ministries presents the Four Directions Humanitarian Award to honor one or more individuals for their dedication to native ministries. This year we chose to honor four individuals who have retired from their service after years of tireless effort. Three of these individuals are pastors retiring or leaving from the three Native American churches in the Upper New York (UNY) Conference: David Rood, from Four Corners United Methodist Church located on the Cattaraugus Territory; Mark Garrow, from Hogansburg United Methodist Church located on the St. Regis Mohawk Reservation at Akwesasnee; and Roselynn Kingsbury from Onondaga Nation United Methodist Church, located on the Onondaga Nation Indian Territory. Kae Wilbert is the past chair of the UNY CONAM. 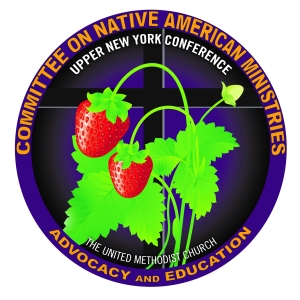 We offer congratulations to these four individuals as recipients of the 2021 CONAM Four Directions Humanitarian Award. Each has been blessed with many gifts which they have generously shared with others. They have made a difference in the lives of countless individuals and will continue to do so in their future endeavors.

A tribute to each follows:

In September 2012, our District Superintendent brought a man with him to our church meeting. The DS introduced David Rood to our church members and told us that he was going to be our new pastor. We were taken off guard and were skeptical as to how non-Native David Rood was going to fit into our Native church. Up until this time we had several “fill in” pastors and we felt lost without a full-time pastor.

Over the next few years, we came to love and respect David because he respected us and our culture. He joined the Seneca Hymn Singers and learned to sing in Seneca. He incorporated the Seneca language into our worship service – singing “He Is Lord", reciting the Lord’s Prayer, and singing the Doxology. We also sang hymns in Seneca in our worship service. He was responsible for having Pete Jones, a famous Onondaga potter, create our Iroquois Communion set. David initiated programs for children – ADVENTure and ReLENTless days. He was also successful in recruiting some of us to attend a Walk to Emmaus weekend. Our dwindling church began to grow with new members and some children as well.

David has a great sense of humor; he played the guitar and had a great voice and taught us some praise songs. He came to know our families and people in our community began to refer to him as the minister who was a roofer. He was eager to learn about our culture, our community, and our traditional beliefs. He “assimilated” into our world!

In February 2021 David left the ministry and left our church. We grieve our loss and are trying to move on without his leadership. We are thankful that God sent David to us and we hope that one day he will return to us. He is our friend.

Mark was raised in a devoted church family. His mom Marlene and his father Leonard were instrumental in the path that took Mark to be called unto Christ to do his work. His grandparents were founders of the Hogansburg United Methodist church. They would gather to eat and sing on Sundays. Mark has a wonderful voice as the gifts of talented singers were imbedded in his family. At times he was the only one singing as we are all shy. Together with his beautiful wife Jennifer they raised their son Leonard. They have a lovely daughter in law Kandy, along with an adorable granddaughter Ophelia.

While being called upon by Christ and taking on the responsibilities of the church lay-leader, Mark still held a full time job as a Gaming Inspector Manager on the Saint Regis Mohawk Tribal Gaming Commission. His family always came first but his unending devotion to the church was seen by the members of the church. He dedicated twelve years of putting sermons together, coming to church, and adapting the traditional lifestyles into parables of our own. Mark’s witty humor made services enjoyable and educational. We always went home applying his message to our daily walk. He served at different churches when needed and continued to learn by taking weekend courses. We will never forget his dedication which gave us a firm foundation as Christians.

Mark, the Hogansburg United Methodist Church will be forever in your debt to bring His sheep back to the fold. As a result of your ministry, we give glory to God. Your generosity to us and to all believers will prove that you are obedient to the Good News of Christ. We will pray for you with deep affection because of the overflowing grace God has given to you. Thank you for your calling. God Bless you, and keep you and your family safe.

Roselynn served the Onondaga Nation United Methodist Church since 2016 and was appointed as a Licensed Local Pastor in 2017. She has worked tirelessly to provide opportunities for worship and fellowship in the church. Rose encouraged relationship building through church participation in community activities such as craft fairs on the Onondaga Nation. She attended Native American Course of Study during her time at the church which helped her expand her understanding of Native communities across the country.

Until the pandemic, mission teams from Lewistown Grace and First UMC Harrisburg in Pennsylvania came to the Onondaga Nation in the summer. During their visits volunteers completed work projects for individuals on the Nation. Rose provided Bible study, fellowship, worship and communion, and helped educate the teams in understanding the importance of developing equitable relationships with native peoples, not mission dependency. In turn, Rose and a few members of the ONUMC visited the Pennsylvania churches to share their native culture.

Although she has retired from pastoral ministry, Rose’s work is not done. She is supervisor for the Native American Outreach Transportation Program (NAOT). NAOT provides transportation to medical appointments, shopping, and socialization for elders and disabled Native Americans on the Onondaga Nation and in the Greater Syracuse Area. This year the program provided transportation to vaccine sites. She was instrumental in obtaining a new vehicle for the program in 2019.

Rose is an active member of the Upper New York Annual Conference Committee on Native American Ministries (CONAM). She volunteers at the Brown Memorial UMC on the Near Westside of Syracuse which is the 13th poorest predominately white neighborhood in the nation.  It is also the largest area of urban Natives in the Central New York area.

Kae has been a long time, boundless worker and supporter for Native Americans locally, regionally and nationally. Kae led the Upper New York Annual Conference Committee on Native American Ministries (CONAM) for the last nine years. Before that she led the former Western Annual Conference CONAM team for six years. Kae has worked tirelessly with CONAM and our three UNY Native American Churches to develop relationships and appreciation for the struggles/challenges facing each church.  Kae coordinated retreat meetings at Four Corners UMC and Hogansburg UMC as relationships were built. As a result of Kae's leadership, the three churches share caring and understanding bonds among themselves.

With the helpful support of staff, Kae led us to create a new logo that reflects the Haudenosaunee (Iroquois Confederation) peoples on whose land the UNY Conference resides.

Kae has been involved nationally with The United Methodist Church's Native American Comprehensive Plan (NACP) to understand and support the needs and aspirations of Native Americans across this country. Her efforts at many levels have been a gift to all.