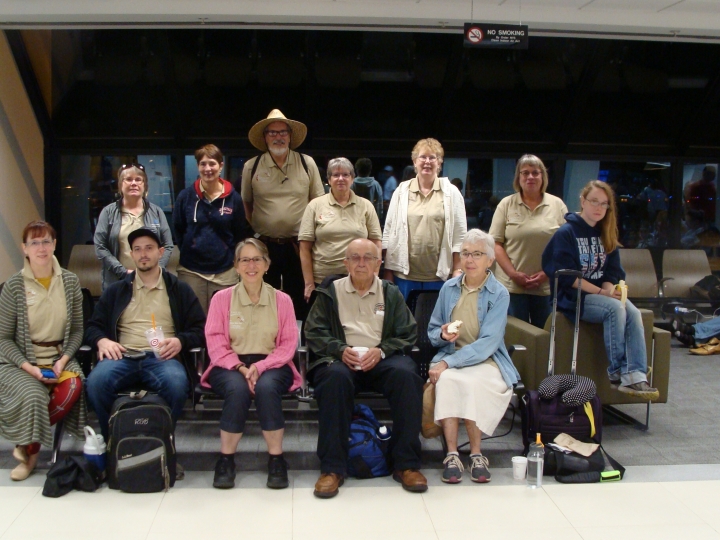 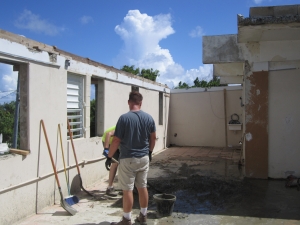 Hello, my name is Ryan Bennett, and the mission trip to Vieques, Puerto Rico in September is the first mission trip I’ve ever been on.

It was pretty much everything I could have asked for, considering we went to a place that got slammed by Hurricane Maria. Even with all the mind-blowing damage, this little island of Vieques endured during the hurricane, it still has to be one of the most beautiful places I have ever visited.

I worked as part of the construction team alongside a mission team from Neosho, Missouri that was doing building repairs. I worked with Dale, Dathan and George and, immediately felt connected with them. We all worked tremendously well together.

Our first task was to bring six wheel-barrow loads of sand and six of gravel up the stairs of the Esperanza United Methodist Church to the second floor – the same church we had worshiped in on Sunday morning. We then mixed bags of cement and the sand and gravel mixture on the floor to make liquid cement which we poured into new forms, replacing a wall that was obliterated by Maria. I had never done anything like that before. I actually enjoyed it quite a bit! Plus, we had a great foreman to guide us in the right direction. Our foreman, a Puerto Rican native whose name is Luis, was probably the coolest guy I have ever worked for. We got along great. He really knew his stuff, and he appreciated my hard work. It took two days to finish the cement job. It was a really great feeling to work on something that means so much to the wonderful people of Vieques.

My second job that week was putting a metal roof on a house on the northern coast of Vieques in a little town called Isabel Segundo. Luis was my foreman again.  He had us working with one of his contractors named Santana. It was very helpful that Santana was bilingual. I got to work with Dale and Dathan again to put the metal roof on. The family that we did the roof for was so appreciative! When we showed up at their house with all the building materials in the back of Luis’s truck, the elderly owner came right out and shook all our hands, repeating “Gracias, gracias.”

The roof was a trickier, more time-consuming project and took pretty much the rest of the week. It went well, and again we made a great team. My favorite thing about getting that roof done is the simple fact that there’s one less family worried about the wind and the rain getting into their house as they sleep and otherwise go about their lives.

My trip and the overall experience of being able to go on this mission trip to Vieques was all so amazing. I am very thankful that God has allowed this opportunity in my life and I wouldn’t think twice about saying “yes” to another mission trip if it’s going to be anything like this one to Vieques.