This young congregation (it’s only five years old and made up primarily of people in their 30s) is largely comprised of families who have immigrated to Toronto, Ontario from the Philippines. Most of the congregation were members of the United Methodist Church in the Philippines and wished to maintain that relationship in their new homeland. Since the Methodist Church became part of the United Church of Canada in 1925, their Bishop recommended that they contact the Upper NY Conference and seek to become affiliated here

On Sunday, Feb. 18, Rev. Butler and Rev. Carlos Rosa-Laguer traveled to Toronto to join the congregation in worship and conduct the first charge conference they have held since the start of the church. While charge conferences may seem simply a matter of taking care of business for most United Methodist Churches, this congregation approached the event with excitement, enthusiasm, and great joy. When informed that they were already recognized as a New Faith Community by the Upper NY Conference, the group broke out into spontaneous applause. 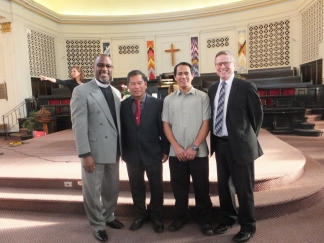 Rev. Butler said, “It’s exciting to work with such a young congregation, especially since they bring a new international and cross-cultural perspective to the Niagara Frontier District. Their excitement over holding their first charge conference was contagious.”

The pastors and lay members of Toronto UMC plan to attend Annual Conference session in Syracuse this spring, where it is hoped that they will be recognized by the body and welcomed as our first international congregation in the Upper NY Conference.