February 13, 2018 / By Mike Block, Director of Missional Engagement of the Upper New York Conference and lay member of Immanuel (Church of the Bells) UMC in Camillus, NY

Editor's Note: This article originally appeared In the Winter 2018 Issue of the Advocate, which zeroed in on the ministry of the laity.

It is not often that one has the opportunity to share information regarding regional and worldly events with a young audience. As part of the Sunday School “JAM” (Jesus And Me) session at Immanuel UMC, our youth coordinator, Carol Doucette had asked if I could offer some words regarding the flooding and hurricane activities happening in the news as part of sharing who Mosses was.

The 15-minute session was set up using a few props and pictures as well as videos. The props were small toys and some children’s clothes 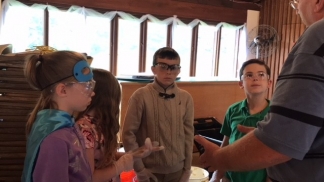 that were soaked in water to simulate a flood. The pictures were from worksites our team had been on that reflected what the children saw on TV, websites, and in the newspaper about Hurricanes Harvey, Irma, and Maria.

The sample picture I used was a picture of a flooded home, then a short video of the family being rescued by a boat, then a set of pictures showing an ERT (Early Response Team) working to clear out a flooded basement. The children were then assembled to don their protective gear to conduct their own “Clean Up” (safety classes and gloves were fitted).

The team learned how to organize and start the cleanup. The tools used were five-gallon work pails and a wheelbarrow. In a darkened room, they cleaned up all the items and placed them into the wheelbarrow. The items the children were picking up reflected some of the things found in a flooded home after the weather-related event.

Now was the time to conduct an end of mission talk/briefing where questions and concerns were addressed. I learned that many of the children did not understand why things could not be cleaned up and reused. I explained that all the items were in water that could have bad or dangerous chemicals or bacteria in it that could make people very sick.

The session went so well that not only were the children pleased in what they learned, but also, they shared this with their families who became very interested and wanted to know more about how they could get involved or trained to be part of an ERT.