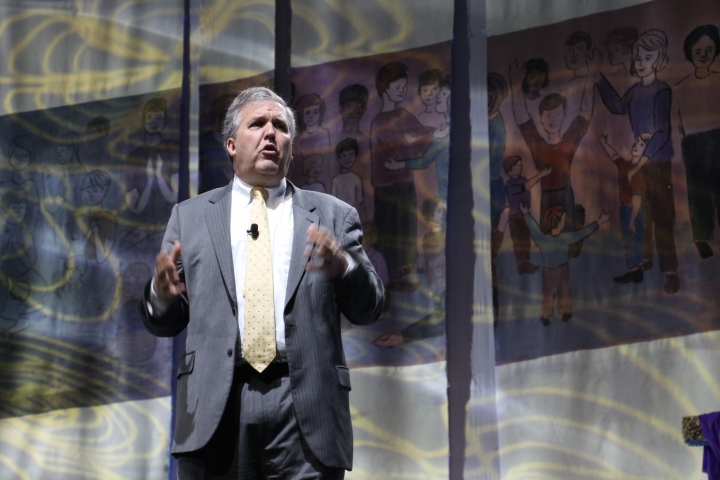 Back in the early days of airplane travel, it took longer to go from east to west than west to east. One time, a plane flying from Washington, D.C., to Los Angeles fell into heavy fog for a while.

“The pilot said, ‘I have good news and bad news. First the bad news: We’re lost. The good news? Now we’re two hours ahead of schedule,’” said Study Leader the Rev. Dr. L. Gregory Jones of Duke Divinity School. “I think that’s a good comparison of where we are today.”

Rev. Jones held his first study session in the morning on June 1 at the 2018 Annual Conference session at the SRC Arena at Onondaga Community College in Syracuse.

“It used to be called ‘keeping up with the Joneses,’ and I’m a Jones, and even I can’t keep up,” he said.

Rev . Jones said we don’t know where we’re going or why we’re going there. So, the study session focused on why we have gotten lost and how we can regain our direction.

He pulled largely from the Book of Numbers during his speech, specifically chapters 10-21. Rev. Jones explained how the Israelites’ complaints went from trivial things to serious complaints about leadership, particularly complaints about Moses.

“So much of the noise is coming from the shallow end of the pool. People who are most acutely aware of the distance with God are the most intimate with God, and that makes the longing even more intense,” he said. “The more intimate our relationship with God, the more we are shaped by prayer,” he said.

In Numbers chapter 16, Korah rebels against Moses’ leadership, resulting in 250 deaths. “There is a crisis of leadership and something is not working,” Rev. Jones said.

“The heart of problem is in Numbers 13 and 14,” he said, when the spies share both a majority report (the Israelites can’t go forward because of the obstacles ahead) and minority report (two said that despite the challenges ahead, God promised the land of Milk and Honey, so they must trust Him and move ahead).

The Israelites wanted to return to Egypt, even if that meant returning to suffering and oppression because it was what was familiar.

“Each one of us has a ‘back to Egypt’ part of our souls,” Rev. Jones said. “We get a glimpse of what God is calling us to do, and we get uncertain. And we say, ‘I don’t think so. Egypt sounds just fine to me.’ Oh how often we just settle for ‘going back to Egypt.’”

He said the deepest problem is that we have lost our way, our sense of where we’re headed and the confidence that we might be able to get there.

“Maybe the future is more than it used to be, but we must get centered and remember what it is to bear witness to God,” Rev. Jones said. “When we do that, we discover the capacity to boldly live into our call; it’s God summoning us to bear witness to the good news God provides us.”

For that to happen, he said, we must realize our tendencies to “go back to Egypt” and allow God to work through us, in spite of us, and beyond us to change us.

“It’s about a way of life where God becomes intimate to us, and we are able to see the world more and more as God sees it,” Rev. Jones said. “When you know what your purpose is … the world looks different, decision-making looks different, ministry looks different. It looks like what God intended when he created us.”

He said people need to have a spirit of confession to be intimate with God.

“When you’re intimate with God, amazing things can happen, but you better bring a crash helmet because you never know what will happen,” Rev. Jones said.

Rev. Jones said a reporter asked him about statistics that a growth of atheism amongst young adults. He told the reporter it’s not growing atheism, it’s a sign of young adults’ boredom.

“They want to see how God is lived in community,” he said. “They want to be at places where you need to wear crash helmets.”

Rev. Jones ended with the story of Maggy Barankitse, giving attendees something to ponder.

Maggy is a woman from Burundi forced to watch as people in her village were slaughtered. After the massacre, she gathered the children who survived and eventually had adopted 30 children. She founded Maison Shalom – a house of peace for the children, so they could have a brighter future. More than 20,000 children have lived and learned there. Leadership in Burundi viewed her as a threat and expelled her from the country.

Rev. Jones once asked her what she prayed, and she told him, “Lord, let your miracles break forth every day, and let me not be an obstacle in any way.”

Despite all the harm others cause in the world, Maggy focused on how she affects things, Rev. Jones said. “Maggy believed that miracles are going to break forth every day,” he said. “‘What people intend for evil, God can use for good,’ she said.”

Maggy trusted God to work through her, in spite of her, and beyond her to change her, which helped her grow intimate with God. And amazing things happened and continue to happen in her ministry, as she continues to help Burundi from afar.