So, you finished the Imagine No Racism (INR) training. You checked off that box for your annual Church Conference. It’s going to be time to move on to the next “cause of the day.” Is that how the INR initiative of the Annual Conference has left you feeling? 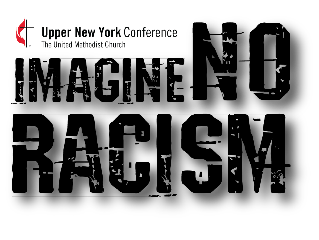 There are still challenges to be met, wrongs to be righted, and sins to be identified and repented of. The work of ridding ourselves, our communities, our churches and our land of the sin of racism is barely begun. Imagine No Racism is not a fad program, a box to be marked off. It is a call to radically changed vision and understanding of the nature and impact that the long-standing reality of racism has had upon our society as a whole. It is designed and intended as a first step in the process of eradicating this evil wherever it exists, in whatever guise we find it.

You may be astounded to learn that, just this past December, Congress enacted legislation establishing lynching as a Federal Hate Crime!  Do you still think the INR program was a “feel-good initiative” rather than a long-overdue corrective to an established and entrenched evil?

The Conference Social Holiness Committee and the Conference Commission on Religion and Race have introduced INR as a first step in what must be a process of learning, empowering and releasing in the world a new way of looking at people that uplifts rather than denigrates, celebrates rather than demeans, welcomes rather than shuns, those whose differences have historically been marginalized.

We, as Christians and as United Methodists, have an obligation to seek the best of all things for those who God puts in our path. Historically, we have educated, supported, sacrificed for, and held ourselves to account for those whom society has marginalized. That obligation has not changed since the first Methodist societies established by John Wesley. We still hold to the notion that all persons are of worth, are created by the same God who made each of us, are gifted by that creator God, and need God’s justifying, sanctifying, and perfecting Grace.

Imagine No Racism was a first, small, step on a journey. Where that journey will ultimately lead we don’t know, but we know that it must be undertaken if we are to follow God’s call on our lives, on the Upper New York Annual Conference, and on the United Methodist Church. To fail to make that journey is to fail to follow the commandments of the One we call Lord.

Already the conversation has started regarding the next steps on this road of discovery and growth. CCORR is asking the same questions you have asked—what now? How do we apply what we have leaned? Where is this leading us? And, most importantly, how do I effectively take this to my congregation and community, so that our world can truly be transformed?

Social Holiness is not, ultimately, a Conference Committee. It is a fundamental attitude of the heirs of the movement started by John Wesley nearly three centuries ago. Social Holiness is holiness. It is what makes us Methodist. It is who we are and what we do.