November 14, 2022 / By Shannon Hodson / .(JavaScript must be enabled to view this email address)

“Not well at all.” This was the answer that the Rev. George Nicholas, pastor at Lincoln Memorial Church, gave when asked how his congregation is healing six months after the May 14, 2022, racially motivated shooting that took place at the Tops supermarket less than one mile away from the church. 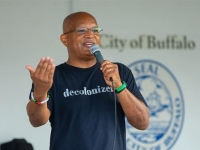 Rev. Nicholas explained, “In this congregation, we have some Tops employees and people who were there at the time of the shooting. We have a direct family member of one of the victims. This is a very difficult time, recognizing that there will be an empty chair at the Thanksgiving table.”

While members of Lincoln Memorial have been on the receiving end of many kind gestures since the May 2022 tragedy, this does not address the underlying issues at hand.

Rev. Nicholas was ordained over 20 years ago, and being a pastor is just one of the hats he wears. He also was part of a team that birthed the Buffalo University Center for Health Equity—this Center has a mission to “eliminate race, economic, and geographic-based health inequities by changing the social and economic conditions that cause illness and shorten lives.” The Center addresses the disparities in health and healthcare between blacks and whites.

Rev. Nicholas recognizes the efforts of the Upper New York Conference taking steps toward dismantling racism through their Imagine No Racism curriculum that came out of the 2016 Northeastern Jurisdictional Conference’s Call to Action.

He compares trainings to dismantle racism to a pocket dictionary, when to further address racism, folks need an unabridged dictionary.

Rev. Nicholas said, “The pocket dictionary is convenient, but it doesn’t dig deep. Think of an unabridged dictionary. It contains the origins of a particular word and every imaginable detail about the word; nothing is cut out or shortened.”

“In order to address the true issues of racism, you need an unabridged troop,” he continued.

In the unabridged approach to addressing racism, Rev. Nicholas explained the importance of relationship building.

“We need to invite people to have conversations,” Rev. Nicholas said.

“We can’t have intense conversations because we don’t know each other,” he added.

One way that Black clergy in the Buffalo area is building relationships is by inviting white clergy from Conklin, NY, to have a conversation together. Conklin is a Binghamton suburb, where Payton S. Gendron, the May 14 alleged shooter, resided.

Rev. Nicholas said, “We do not want to have the May 14 incident define the relationship between Conklin and Buffalo.”

Rev. Nicholas referenced the biblical truth that the apostle Paul expressed in Romans 12:5, “so in Christ we, though many, form one body, and each member belongs to all the others.”

Rev. Nicholas added, “We are all one; addressing systemic racism should be important to everyone.”

Rev. Nicholas explained how systemic racism can’t be dismantled because people are not speaking up. He said, “So many people are being quiet, and some are outright supporting racism. There are others who believe racism is not their problem—many are in denial.”

To empower truth telling, Rev. Nicholas said, “I think that anyone who has a heart for this work should be involved, regardless of their ethnicity, but…there has to be a sense of whites taking a step back and allowing for people who this is their personal experience to kind of lead.”

Rev. Nicholas also expressed that when it is the time for white people to speak, they need to speak to each other.

He said, “It’s great and meaningful that (white people) express their solidarity with our struggle, but we also need that powerful unapologetic advocacy and allyship spoken in spaces where Black people are not present. We need them questioning, challenging, and engaging with people in their church who may be in denial, saying, ‘We don’t have these problems. Look at this one Black family who comes to our church.’”

He is part of the team of clergy who came to the 2022 Annual Conference with a petition to create a Buffalo 10 Scholarship, to be used for college students who live in the 14208-zip-code, where the May 14, 2022, mass shooting took place. This petition was supported by 93.6 of the Conference body and people began donating to this fund instantly.

This scholarship is just one part of a long-term initiative to work toward dismantling racism in Buffalo.

“This scholarship is a great first step (at addressing systemic racism) and it’s an opportunity for people across the Conference to enhance their engagement,” Rev. Nicholas said.

Rev. Nicholas has invited any laity and clergy across the Conference, regardless of their race, who are interested in being engaged with this anti-racism ministry, to contact him via email at gfnicholas1@gmail.com.

Click here to donate to the Buffalo 10 Scholarship online.