From concerts to a hoagie drive-through, the creative ways in which local churches have raised funds for Africa 360 have been astounding. Penny Proper, a member of Newark First United Methodist Church, has a very interesting story about how she raised funds.

Penny is 53 and has been a member of Newark First United Methodist Church since she was a small child. She faithfully attends worship every Sunday. Penny has special needs and was cared for by her mother her entire life, until her mother passed away in 2012. With no other family members nearby, Newark FUMC, in a sense, became Penny’s family. Members of the congregation bring her to and from church and to appointments; they also help her with errands. 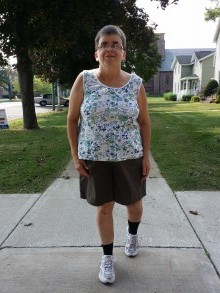 In June of 2015, Penny attended Newark FUMC’s monthly Open Door Meal and listened to the Rev. Jeff Childs of Penn Yan UMC speak about Africa University. His talk touched a place in her heart.

Still, Penny persisted. During a summer lunch with Della Ludwig, who was at the time, the leader of Newark FUMC’s ministry team, Della and Penny brainstormed a way in which Penny could raise funds for Africa 360.

Della knew that Penny loved walking and suggested using that to raise funds. Penny remembered that Jeff Childs said that he hoped one day to walk the distance to Africa University, which is located in Mutare, Zimbabwe. Penny asked Della, “Can I try to walk from here to Africa University?”

Della calculated that the distance would be 8,085 miles (by the way the crow files), and answered, “You can, but you will need some help.”

Della and Penny created a plan where Penny would walk as much as she could and members of the congregation could buy slips worth three miles for $1 to donate to Penny or they could also walk and donate their miles to Penny. And so the walk to Africa University began on August 30, 2015; Penny’s goal was to make it to Africa University before Upper New York’s Annual Conference, which began on June 2, 2016. 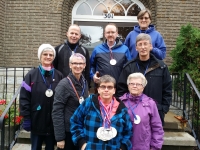 Penny was excited to have the support of the congregation and they were thrilled for Penny. Penny is a very humble and soft-spoken person, but each week, she gathered her courage to speak to the congregation, reminding them about the needs of Africa University and prompted them to purchase three-mile slips. Members of the church and larger community eagerly purchased these miles and applied them to Penny's walk.

Newark FUMC’s pastor, the Rev. Hyun Joo Yang, said, “It was great to see Penny become so enthusiastic. She was so brave. Each week, I asked her to announce to the congregation where she was with her miles and she did, faithfully.”

Cindy Heckler, a member of the congregation, smiling as she reflected on Penny’s accomplishment said, “You see, Penny is very shy. It was really amazing to see her speak in front of the entire congregation; she was so diligent and steadfast in this campaign. It was wonderful to see her come out of her shell.”

Penny's determination became contagious in her church. Soon, she had a band of walkers who tracked their steps and donated them to Penny. Nearly every member of the congregation either bought miles or walked themselves and donated their miles to Penny.

Jessica Wells, a member of the congregation, proudly donated miles to Penny every week. Jessica said, “I wear a Fitbit and I have a job where I am required to walk a lot. So, I tracked my miles every week and gave them to Penny.”

Penny shared that it was hard to speak in front of the congregation, but it became fun. “For a long time, I was in the ocean,” she said, with a chuckle. “I walked 552 miles by myself and I wore out two pairs of shoes,” she continued.

Della, described by many as Penny’s closed companion, said, “It has been a great honor to work with Penny as she worked to respond to the call she received.  It has been joyous to watch the bonds of love grow between her and our congregation through this experience.” 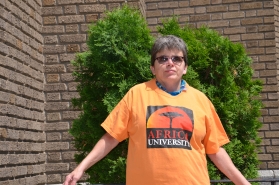 Even among all the other celebrations, perhaps the most touching moment was when the church celebrated Penny and all she had done for Africa 360. They presented Penny with a plaque, an Africa University sweatshirt and t-shirt, a brand new pair of sneakers, and a letter from James H. Salley, Associate Vice Chancellor from Africa University’s development office, commending her for her efforts.

Penny also received a letter from Upper New York Area Resident Bishop Mark J. Webb, who said “Africa 360 is a holistic approach to joining with United Methodist Christians around the world to provide health and education for generations by eliminating malaria deaths, as well as providing scholarships to Africa University. Your commitment to this goal and your spirit of servant leadership is a testimony to the ways in which God can use us to make the lives of others different! You are a hero for the cause of Christ! Thank you for showing us how to offer Christ to those around us.”