Annual Conference 2020 was one like no other. Yet it remained vital to have a variety of voices at the table—actually, at computers and phones. Our worldwide United Methodist Church values healthy conversations. To that end, the Commission on Religion and Race, and Commission on the Status and Role of Women monitor who is speaking at Annual Conference in terms of clergy, laity, race, and gender. 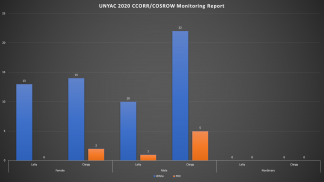 The rules and format of this secured livetream created some limitations to monitoring, and some people did not identify themselves, which means that our numbers are estimates. (Click here to view a larger image of the graph pictured to the right.) That said, here's what we learned:

The data we collect give us a working scorecard as we pursue our conference-wide goal of becoming a more just and loving expression of God’s kin-dom in which all voices are heard and matter.