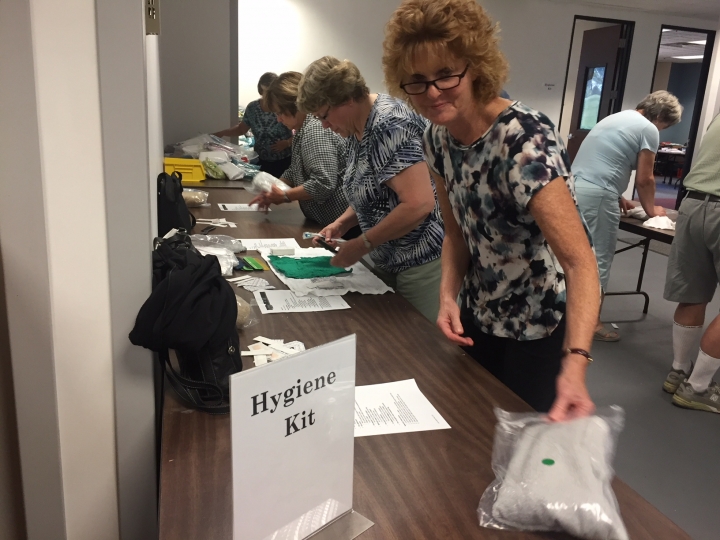 Before the start of the 2018 Upper New York Conference session, dozens of UNYC members gave back to the community.

The UNY Mission Central HUB hosted an event May 30 in which volunteers helped assemble hygiene kits and flood buckets for the United Methodist Committee on Relief.

UNY Director of Missional Engagement Mike Block said the UMCOR kits are important because if a disaster happens, these are the first things homeowners receive.

“The kits are very important because they are the standby kits in case there’s a problem some place,” said UNY Director of Missional Engagement Mike Block. “Normally if there’s a storm that happens or a problem that happens out in the neighborhood, people don’t know how to start back up … we’re giving them that beacon that says, ‘Come here and we can help you get there.’”

Block said the point of the event was to have the kits on standby in case of an emergency.

“Hopefully we never have to use them, but just in case, here they are,” he said.

The Rev. Diane Prentice, pastor at the Kirkwood United Methodist Church, assembled some of the kits.

“I’ve worked on these kits before, and I know that it’s a worthwhile project,” Rev. Prentice said. “It’s done in a short period of time, and the help is always needed.

Terry Ritter, a lay member from Manchester UMC, said her church is very involved with health kits and flood buckets.

“People going through natural disasters … these kits allow them to be clean, to have the basics of life,” Ritter said. “To be able to wash your face and be clean is huge when you don’t have anything.”

Val Gray, a lay member from the Averill Park UMC (Church of the Covenant), said he decided to volunteer after reading an email.