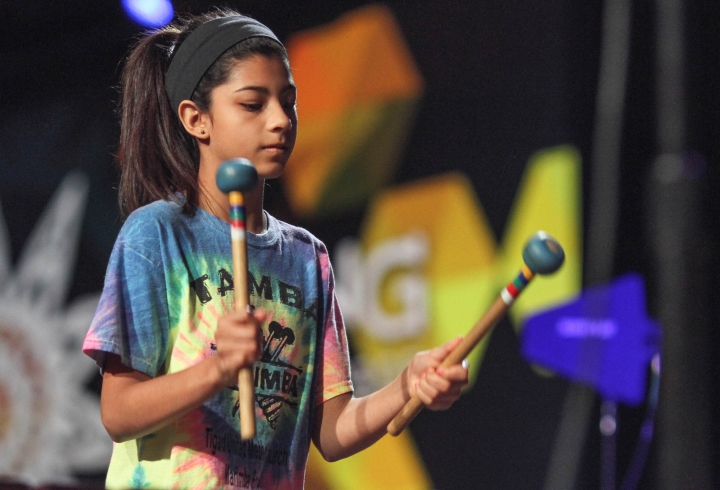 Worship, an address by young people and a silent protest for LGBTQ inclusion began Day Five of General Conference 2016, which ended with final legislative committee meetings.

While only two young people spoke on the General Conference stage Saturday morning, thousands more stood with them. Chelsea Spyres of Detroit and Peter Cibuabua of Kinshasa, Democratic Republic of Congo, began their witness by identifying themselves as “ambassadors sharing young people’s voices from around the world.”

That voice declared the uncompromising nature of God’s love and grace for all people.

“The objective of this message is to help you, our brothers and sisters in the church, to understand how widely and deeply the young people are engaged in Christ’s journey with energy and love,” they said.

During the morning plenary, lay delegate Fred Brewington requested a moment of personal privilege to speak on behalf of fellow New York Conference delegate, Dorothee Benz. Dozens of protesters— many with rainbow duct tape over their mouths — stood outside the space reserved for delegates to symbolize the silent treatment they feel LGBTQ people get from the church.

Two days earlier, presiding Bishop Hope Morgan Ward had ruled Benz out of order when she used the term LGBTQ while speaking about why she favored Rule 44, which delegates did not adopt. Rule 44 was offered as an alternative process to Robert’s Rules of Order for dealing with particularly complicated and contentious legislation through group discernment.

Ward said then that the vote was over whether to approve Rule 44, not how it might be applied. Benz was asked to sit before her allotted three minutes had expired.

Brewington told United Methodist News Service that the problem was the manner in which the ruling took place. He asked Bishop Cynthia Harvey, presiding bishop for the May 14 session, for the plenary body “and you as chair” to recognize harm was done.

Harvey called for a time of prayer. “There is a lot of hurt and there’s a lot of healing that needs to happen,” she said. In her prayer, she asked for minds, hearts and ears to be open to all God’s children.

Preaching during morning worship on May 14, Bishop Sudarshana Devadhar used the familiar story of the Magi to urge delegates to find “a new epiphany” by listening to each other’s perspectives and, most importantly, by listening to God.

With the theme “Going with Courage,” Devadhar, who leads the New England Conference, told those gathered how important it is to be brave enough to listen if we are to arrive at the right place:

Because the Magi heeded the message from God, Devadhar said, they were able to bring an epiphany, a new perspective.

He encouraged General Conference to look to Jesus.

“We are not here to use the Bible selectively to fulfill our selfish goals and agendas,” the bishop said, “but to look at the ministry and mission of Jesus, and ask the question, with our Wesleyan DNA: ‘Will the 2016 General Conference go down in history declaring that we have offered Christ to the world?’”

United Methodist Rural Advocates filed a legislative petition before General Conference to add a position to The Connectional Table “able to represent the variety of rural ministries in the United States and the breadth of issues facing rural America.”

Another petition would update Paragraph 2549 in the Book of Discipline on the “Disposition of Property of a Closed Local Church.” The update would include the option to make a gift of the property to a nonprofit with values consistent with the denomination that “will begin, enhance or continue the work and vision of ministry with the poor in that community.”

Much of the focus of The United Methodist Church “seems to be on numerical growth,” the Rev. Roger Grace said. “In some of the rural areas, there is not a lot of potential for numerical growth, but there is still a need for the church to minister to and with the community.” Grace, a West Ohio Conference delegate, is outgoing president of Rural Advocates.

Ethan Gregory, a reserve delegate from the Central Texas Conference, missed his May 14 commencement at Perkins School of Theology, Dallas. Carlene Fogle-Miller, a Florida Conference delegate, served as secretary of the Faith and Order Committee instead of going to her graduation festivities at the University of Mississippi Law School.

Pleas for justice from Lumads

On May 16, a small group of Lumads, indigenous people of Southern Philippines, will address the General Conference. They will share how they have been the target of cruelty for decades. Ancestral land owned by the Lumads is a jewel rich in resources that tempts many, including the government and rebel forces.

Norma Capuyan and Monico Cayon spoke with United Methodist News Service on May 13.

Cayon told of an “evil day” in September 2015 when 150 men, women and children were rounded up to witness militants murder two village leaders. A schoolteacher was tortured and killed in his classroom and the school burned down.

Kerlan Fanagel, spokesperson of the Lakbay Lumad USA and chair of Pasaka Confederation of Lumad Organization in Southern Mindanao region, said they came to the U.S. seeking solidarity, asking church people and other groups “to support and understand the struggles of indigenous peoples."

“We thank the United Methodist Church and other church people for having been an endless sanctuary to the Lumads who have evacuated, hurt and dispersed,” he said.