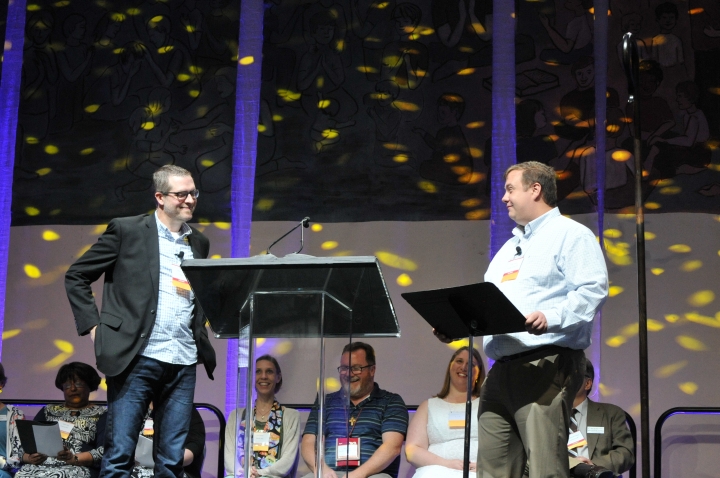 The Leadership Report was presented on a fun note, with Conference Lay Leader Susan Hardy describing how she thought her first meeting would go through a video of Conference Leadership Team members saying one-liners, sharing their opposing views as stats, and posing next to those stats.

Then the Rev. Steve Taylor, of the Panama UMC, and the Rev. Andrew Sperry, of the Saratoga Springs: UMCWest, delighted the crowd with some hilarity, comparing and contrasting their opposing views, like how Rev. Sperry is a hardcore liberal who drives a fuel-efficient car and hangs out at the local organic-fair trade, bird-friendly, don’t-hurt-the-bees coffee shop or that Rev. Taylor is skinny jean-wearing, guitar-playing, contemporary song-singing, soul patch-sporting, deer-killing stereotype of a conservative pastor. 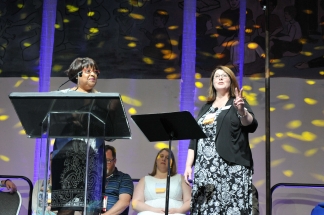 CLT members Valerie Clark and Cornerstone District Superintendent the Rev. Sherri Rood took the stage next to discuss the leading portion of the L3 model, in which the CLT utilizes Ministry Action Plans (MAPs) that focus on a particular dilemma and logically lays out a transition from where we are to where we ant to be. MAPs also clearly define who is responsible for tasks and when the tasks should be accomplished, Valerie said.

“Through the MAP process, we have already seen some great progress in our Conference,” Valerie said. “For example, since the last session of Annual Conference, the Mission Central HUB has opened … that was one of our MAPs.”

“That’s right, and don’t forget about the fact that we were able to pay 100 percent of our General Church apportionments for the second year in a row,” the Rev. Rood said. “Just a few years ago, we payed less than 60 percent, and the MAP process has been very helpful in getting us to this healthy financial place.”

The MAPs process has also been introduced to the District Leadership Teams.

After more discussion of MAPs, Susan took the stage again. 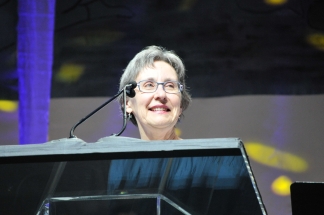 “Sherri said it so eloquently, ‘We can’t know where we are headed if we don’t know where we are,’” Susan said. “And, friends, there is one tool available to us to help us know where we are that many of us are not taking advantage of. I’m speaking of VitalSigns. This is software that we already pay for through our Ministry Shares, and it helps us track key information, like worship attendance, baptisms, professions of faith, and so on. It only takes a few minutes each week to enter this data, and, guess what: If you enter your data weekly, it will automatically load the annual data you are required to enter into Ezra.”

The CLT ended their report with a recommendation that every UNY congregation be required to use the VitalSigns Dashboard starting Sept. 1, 2018, which generated much discussion.

The Rev. Cathy Hall Stengel, of the Rush UMC, spoke against the recommendation, saying the deadline was unrealistic, that internet access isn’t available at every church, the work will fall on the pastor, and that she’s confused by the platform because she already knows enough about her church and where it is going.

Pastor Nate Lange, of the Middleport UMC, said he is a huge proponent of technology, but mandating the use of VitalSigns could put a strain on smaller churches. “There must be a better way,” he said,

Chaplain Capt. the Rev. Keith Manry said as part of his job as a U.S. Air Force chaplain, he must report data daily. He said many chaplains have fought it, but by recording the data daily, it provides real-time information to commanders and staff to make changes of direction and is much more accurate than trying to play catchup. “I thank the Conference for being visionary in this,” he said.

The Rev. Dawn Quesenberry, of the Delevan and West Valley: Saint Paul’s UMCs spoke in favor of the recommendation, saying that her church uses it, that VitalSigns should be something done at the lay level, and that deadlines are important.

An equalization member spoke against the recommendation, saying her church does not have internet and that using VitalSigns could be difficult for many small churches.

The Rev. Robin Blair, of the Ithaca: Forest Home and Common Good Radio UMCs, said she disliked the mandatory component of the recommendation and thought that data would not be collected for her benefit. “I like technology and helping us move forward, but this doesn’t feel like that,” she said.

And then came an amendment.

The Rev. Stephen Cady, of the Asbury First UMC in Rochester, proposed striking “required” and adding “strongly encouraged” to the recommendation. It was seconded. “If it is strongly encouraged, maybe more churches will start to use it and help others to use it.”

After a speech in favor of the amendment, the Rev. Merle Showers, retired, called the question on all before the Conference. The call was supported.

The amendment was voted upon and supported.

The Rev. Naomi Annandale tried to clarify some information, but Bishop Webb ruled it was out of order. But Rev. Annandale got another chance at the mic after the Rev. Robert Dean, of the Main Federated Church, asked a question about how to record information for churches with more than one society.

The recommendation as amended was then voted upon and supported.